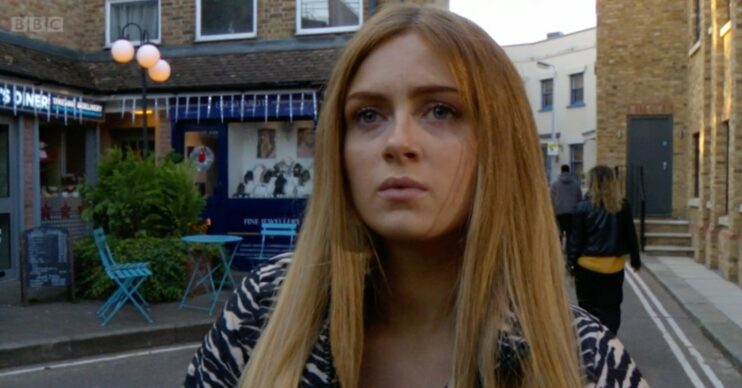 The star has done away with her long red locks

Maisie Smith has revealed a stunning new look following her exit from EastEnders after 13 years on the soap.

The star has cut her famous red hair, ditching her long locks for a shoulder-length crop!

Maisie debuted her new look in an Instagram story yesterday (Thursday, December 30) for her 1m followers to see.

The star was attending a panto with her fellow EastEnders castmates, Natalie Cassidy, Milly Zero, Charlie Wernham, and Zack Morris.

In the selfie taken by Milly, Maisie’s new look can be seen. The star has cut her long red hair shorter, so now it reaches her shoulders. She wore it with a deep, off-centre parting and flicked the ends out, sixties style.

The Strictly star can be seen wearing a cream coloured hoodie and bright orange handwarmer gloves. The former castmates are all enjoying a drink too.

EastEnders cast trip to the theatre

Maisie and her EastEnders castmates were at the theatre to support their fellow soap star, Brian Conley, in his new panto.

Brian, 60, is playing Buttons in Cinderella at the Cliffs Pavilion in Southend.

In another picture posted on Instagram, Maisie, her EastEnders castmates, and family, can be seen with Brian after the show.

“So enjoyed watching THE panto king do this thing today @realbrianconley,” she said.

“You had us in stitches. We love ya!”

The pictures of Maisie with Brian give fans an even better glimpse of her new hairstyle too.

The Strictly star said goodbye to EastEnders on December 14, as Tiffany left Albert Square to start a new life in Germany.

After her final scenes had aired, Maisie took to Instagram to pay tribute to the show. The star posted a photo of herself standing next to the Albert Square sign.

“Wow. Eastenders you have been a dream,” she wrote. “Lotta tears, lotta laughs and a whole lotta love. Episode 685 complete.

Plenty of Maisie’s followers took to the comments to wish the star well, including Milly Zero, who simply called Maisie a “SUPERSTAR”.

What do you think of Maisie’s new look? Leave us a comment on our Facebook page @EntertainmentDailyFix and let us know what you think.