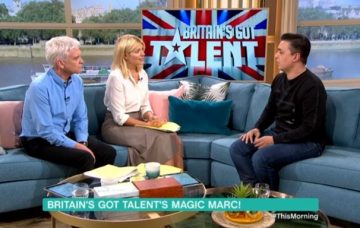 The dad, who had the BGT judges, presenters Ant and Dec and audience in tears on Saturday night after sharing his wife’s breast cancer battle and the couple’s 10-year struggle to have a baby, asked the ITV daytime hosts to think of a fictional character.

And when the producers cut to a home video he took over the weekend of his daughter Isabella, aged two and a half, she predicted that Phillip would have Darth Vader in mind while Holly would be thinking of Peppa Pig.

The trick left both presenters open-mouthed trying to figure out how the young girl had done it.

Holly exclaimed: “What?! She’s the one that needs to go on Britain’s Got Talent, not you!”

Marc replied: “Everyone has said that. I’m just a frontman. She’s the brains behind the operation.”

Read More: OPINION: Britain’s Got Talent act “too dangerous for TV”? It wasn’t even in the show’s top 10

His mind-reading act and family’s moving story of triumph over adversity was so powerful that Ant and Dec pressed their series’ only golden buzzer, sending him straight through to Britain’s Got Talent’s live semi-finals.

Phillip told him on today’s This Morning: “For us it was breathtaking. You got the golden buzzer because it was so unusual and so heart-wrenching.”

Marc and wife Tessa had been trying for a decade to conceive, including five IVF attempts.

After receiving the wonderful news that she was finally pregnant, fate struck a cruel blow as she was then struck down with cancer.

She underwent chemotherapy and thankfully both Tessa and unborn Isabella survived.

He told Holly and Phillip: “It was a complete contrast. You can imagine the euphoria, ‘We’re going to be parents after all this time’, which was amazing.

“We got to the point where we realised it might not happen and then we were so surprised when it actually did because Isabella was a frozen embryo.

“To have the diagnosis of the cancer in Tessa… she said it would be fine because we were so happy about the pregnancy.

“I always err on the side of caution, I said ‘Let’s just tick that off’.

“When I did the performance I always said to Tessa, ‘If I ever do Britain’s Got Talent, I would do it as a dedication to you’. I knew what concept it would be.

“I know people got really emotional watching it but it was never supposed to be a sob story.

“What it’s supposed to be is a realisation of what real magic is to me.”

He then showed them “real magic” with photos and footage of Isabella as a baby drawing with a red crayon, saying “hat”, cuddling a panda puppet while asleep in her cot and playing with a Rubik’s cube matching Amanda’s pattern.

Simon told him: “I have a feeling this act is going to change your life. It was unbelievable.”

How do you think Marc did? Leave us a comment on our Facebook page @EntertainmentDailyFix and let us know what you think!