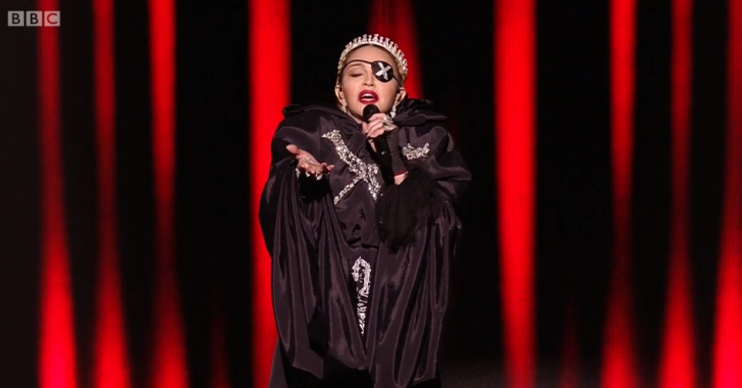 While others praised her political statement

Last night’s Eurovision featured an interval performance by the Queen of Pop herself, with Madonna taking the stage.

But her performance did not go down well with some viewers, with people taking to Twitter to criticise her singing.

Read more: Mel B ‘rushed to hospital after losing sight in her right eye’

The pop icon began her set with a paired down performance of her classic hit, Like a Prayer, before moving into her new song, Future, performed with rapper Quavo.

The song is the latest single from her upcoming album, Madame X.

But Madonna appeared to struggle from the start, with viewers complaining about pitch issues and a lacklustre performance.

Dad: “this is the worst Eurovision performance I’ve ever seen.”
Mum: “that’s Madonna…”
Dad: “which country is she from?”
Mum: ” The US…”
Dad: “the US don’t do Eurovision” 🙄 #eurovision

Madonna: sings.
All of us: #Eurovision pic.twitter.com/6hp7PIfZ5d

UK: According to votes we had the worst performance and song at #Eurovision

She even got called out during the show, with the presenter for The Netherlands saying she was thankful “for Madonna’s autotune.”

But some viewers came to the singer’s defence, claiming that some fo the criticism was a sign of ageism.

Whatever you thought of Madonna’s performance, try criticising it without being ageist or demanding she immediately retire. #Eurovision pic.twitter.com/RKsfNb5ZCz

@Madonna should win #Eurovision omg that was amazing???

Others insisted that how well she performed was not important, praising her for using her platform to make a bold political statement.

Y’all can come for her for the #LOLs all you want but Madonna, the biggest female artist of all time, just utilised the biggest TV audience available to promote unity between Israel and Palestine during one of the most controversial #Eurovision’s ever, what have you done? pic.twitter.com/3swRcuxtnJ

Let’s not focus on Madonna’s sub-par vocal but instead look at her mic-drop political statement against the treatment of Palestine by the host country who just paid her millions of dollars to perform in their Eurovision internal#Madonna #Eurovision pic.twitter.com/NgO7b75LNn

While Eurovision tries to keep itself free from political discourse, this years competition has been controversial due to its host country, Israel.

Several groups took the opportunity to protest the Israeli blockades in Gaza – and Madonna got in on the action, including Israeli and Palestinian flags in her performance.

As she performed Future – which includes the lyrics “Not everyone is coming to the future, Not everyone is learning from the past” – two of her backup dancers wore Israeli and Palestinian flags on their backs.

The performance ended with the two dancers standing with their arms around each other’s shoulders, and their backs to the audience.

Eurovision organisers claimed the political statement had not been approved – and had not been part of a previous rehearsal.

“Two of Madonna’s dancers briefly displayed the Israeli and Palestinian flags on the back of their outfits,” they said.

“This element of the performance was not part of the rehearsals which had been cleared. The Eurovision Song Contest is a non-political event and Madonna had been made aware of this.”

Madonna tweeted her gratitude at being able to perform after the competition, describing herself as a “freedom fighter.”

Madame ❌ is a freedom fighter…………….I am grateful. For the opportunity to spread the message of peace and unity with the world. 🌏🌍🌎. #future #madamex #quavohuncho pic.twitter.com/UdMdbePB0L

“Madame X is a freedom fighter,” she said. “I am grateful for the opportunity to spread the message of peace and unity with the world.”

What did you think of Madonna’s performance? Leave us a comment on our Facebook page @EntertainmentDailyFix and let us know.