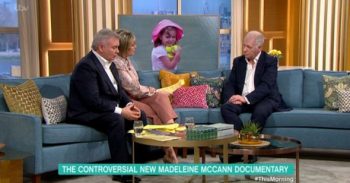 The documentary is available to watch from today

A controversial new documentary about the disappearance of Madeleine McCann has been heavily criticised by the little girl’s family and associates.

The Disappearance Of Madeleine McCann, an eight-part documentary, is available to watch as from today (Friday March 15) on Netflix and has already caused quite a storm.

While Kate and Gerry McCann have washed their hands of the series, their spokesperson Clarence Mitchell has now appeared on This Morning to criticise the documentary makers and talk about how it will affect the parents.

Talking to Friday hosts Eamonn Holmes and Ruth Langsford, adviser Clarence said: “Of course it’s distressing. Kate particularly feels, at times, the media are in it for a good story rather than wanting to help.

“In this case, they didn’t ask for this documentary. At the time, when they were first approached, they felt it wasn’t going to help. They still feel it won’t help.”

He went on to say: “This fuels those conspiracy theorists, there’s whole websites and forums dedicated to vilifying Kate and Gerry and others around them, myself included.”

He carried on: “It’s nonsense. If the allegations that have been disproven and discounted are aired again, I’m afraid it will fuel that. Kate and Gerry ignore all of that.”

Clarence went on to discuss what Maddie’s parents think happened to their little girl, who would be a teenager now studying at secondary school.

He said: “They have always believed that, in the absence of any definitive evidence to suggest that the worst has happened, she could still be alive and that’s what keeps them going to this day.

“There is no evidence that she’s come to any physical harm whatsoever and, until somebody absolutely sits them down and says they have the worst possible news for them, and the evidence, then they have to keep going.”

Meanwhile, Eamonn said that the director ran the risk of “feeding the frenzy”, and encouraging “conspiracy theorists”.

Eamonn commented: “Here’s the worry. I am that Netflix customer. I am the man that watches these documentaries and none of them give you any answers on anything. My worry is what I’m seeing here is not a documentary, something factual, but a piece of entertainment.”

Eamonn then clarified that none of those present had actually watched the series, as it had only been released this morning.

Leicestershire-born Madeleine was three when she disappeared on holiday in 2007.

The Netflix series features interviews with more than 40 contributors, and includes archive footage and re-enactments.

Do you want to watch The Disappearance Of Madeleine McCann? Leave us a comment on our Facebook page @EntertainmentDailyFix and let us know what you think!