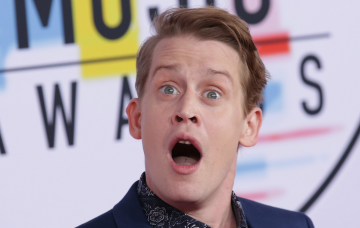 Macaulay Culkin is changing name next year after fan poll

Macaulay Culkin is changing his middle name after letting fans decide in an online poll.

The Home Alone star, whose full name was Macaulay Carson Culkin, asked for suggestions in a post on his Bunnyears site in November.

He said he wanted a new moniker because his previous middle name was “something dumb”.

The former child star posted: “Larry? Orange? Honestly, I can’t even remember it.

“So I asked you all to send in some better options so I can go down to the court house and explain to a judge why I need to change my middle name to something cool.”

From the dozens put forward by fans, the 38-year-old whittled them down to five — TheMcRibIsBack, Kieran, Shark Week, Publicity Stunt and Macaulay Culkin — before giving his followers the final say.

And after tens of thousands of votes, the winner by a landslide was… Macaulay Culkin.

The actor announced the result on Twitter on Christmas Day, 24 hours after the poll ended.

He posted: “My new middle name has been chosen. You voted and the winner is clear.

“In 2019 my new legal name will be: Macaulay Macaulay Culkin Culkin. It has a nice ring to it (if you like my name). #MerryChristmas.”

Announcing the poll in November, the star wrote: “This poll is open till Christmas Eve so I can wake up to a wonderful present from everyone.

Merry Christmas to me, from all of you!

My new middle name has been chosen. You voted and the winner is clear.

It has a nice ring to it (if you like my name).#MerryChristmas

“Sure, I might have gold-plated watercraft, and chrome-plated invisibility cloaks, but all I want for Christmas is a new middle name.

“And then you can be all ‘Oh, you got your wife a beautiful portrait of your family? Well, I chose Macaulay Culkin’s Middle Name’.”

The winning choice received more than 60,000 votes, a country mile ahead of runner-up TheMcRibIsBack with just 14,500.

What do you think of his new name? Leave us a comment on our Facebook page @EntertainmentDailyFix and let us know what you think!