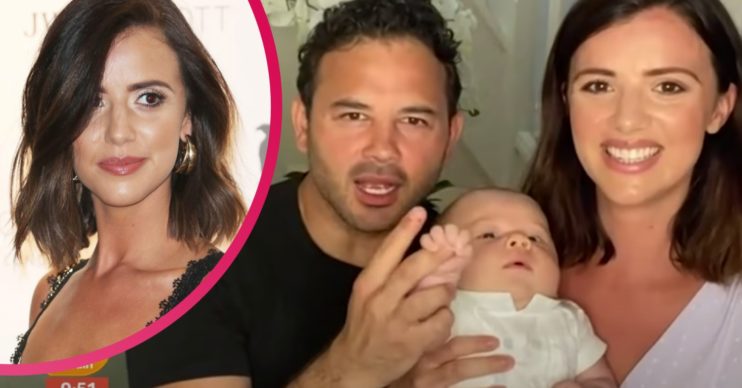 The former TOWIE favourite marked a special milestone in her baby boy Roman’s life with a “stunning” snap on Instagram.

It showed the star holding son Roman with a beautiful crystal blue seascape in the background.

Roman, dressed in a blue and white romper suit and a blue hat, looked delighted to be carried by his mum.

But his attention seemed to have been grabbed by whoever took the picture, with Roman looking in their direction. Maybe it was dad Ryan Thomas?

Lucy’s face, however, was partially obscured by a huge, wide-brimmed sun hat. And even though her eyes weren’t visible in the pic, she was clearly focusing tenderly on her little one.

My world is 6 months old.

She also wore a patterned blue and white swimsuit that had her Insta followers gushing and clamouring to have one of their own.

“My world is 6 months old,” Lucy captioned the cute photo.

The image picked up tens of thousands of ‘Likes’ from admirers within minutes. Many were keen to try out Lucy’s swimwear style for themselves and wanted to know how they could get a similar bikini.

Lucy’s fans also took the time to comment on the pic about how Roman is growing up fast and what a great mum Lucy is.

“Time has flown by! You look incredible, too,” wrote one follower.

“Stunning! Although can’t believe it is six months already,” added another.

Celebrity pals also offered up their best to Lucy in the comments. Lydia Bright was just one among many to shower Lucy’s account with blue heart emojis.

Made In Chelsea’s Ashley James reflected: “Omg so quickly. Love this photo so much!”

Lucy recently revealed she has dropped 56lbs since giving birth in March.

During a Q+A session with followers, she shared her secrets for her weight loss, including daily walks with the pram, workouts, stretches and breakfast muffins.:

“I’m going to do a post on it very soon but honestly I have done no fad diet, no meal replacement shakes or extreme exercise plan,” she told fans.

Lucy Mecklenburgh Ryan Thomas The Only Way is Essex