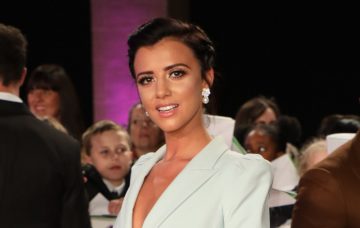 Lucy Mecklenburgh has hit back after it was claimed she got “cosy” with a mystery man.

The former TOWIE star, who is in a relationship with Ryan Thomas, was filmed getting close to a partygoer while on holiday in Dubai earlier this month.

In the video obtained by Mail Online, Lucy is seen placing her hand on the man’s back before giving him what appeared to be a kiss on the cheek.

On Wednesday, Lucy took to Twitter to call the claims “ridiculous” and insisting the guy was just a friend.

She wrote: “Since when has saying goodbye to a friend turned into a cosy night out?!#ridiculous.”

Since when has saying goodbye to a friend turned into a cosy night out?! 🤣 #ridiculous

It comes after an onlooker claimed to the Mail Online that Lucy and the man in question looked “very cosy”.

The source said: “At The Penthouse, Five Palm, Dubai, Lucy Mecklenburgh walked in with a guy, who was not Ryan.

“Lucy seemed ‘overly’ friendly with this guy.  She was touching the inside of his legs, kissing his neck, holding his hand for at least an hour. Lucy then left on her own followed two mins later by the guy. They looked very cosy indeed!”

They added: “Ryan is such a lovely guy and doesn’t deserve to be treated like this especially as only two days ago they are all over OK! Magazine and she is saying she wants a ring next year from him.”

ED! has contacted representatives for Lucy for further comment.

Lucy, 27, recently revealed she would like to settle down with former Coronation Street actor Ryan.

She told OK! Magazine: “I wouldn’t waste my time with someone if I didn’t believe we were on the same page about children and getting married. I know we both want the same things in the future.”

Meanwhile, Ryan said he thinks Lucy wants him to propose next year.

He told the publication: “She’s always dropping hints about what she wants to happen. I think Lucy wants me to propose next year!”