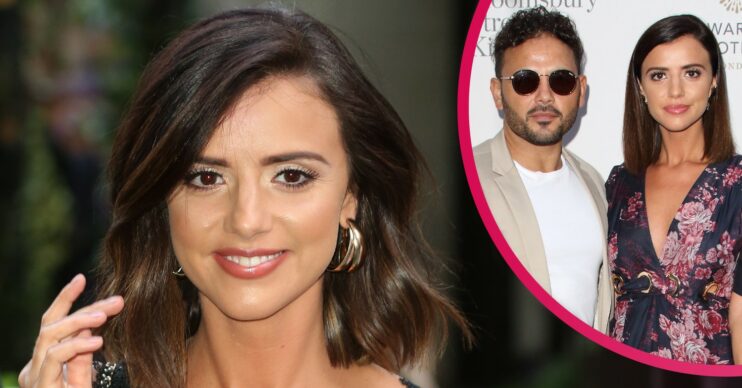 Lucy Mecklenburgh has shared an adorable photo of her baby daughter and son Roman cuddling.

The former TOWIE star posted the snap to her Instagram Stories on Tuesday after announcing the arrival of her little girl with her fiancé Ryan Thomas.

Lucy shared a photo of her little boy planting a kiss on the tot, who looked super cute in a pink cardigan.

Over the photo, Lucy wrote: “We had our first outing yesterday. Roman was just kissing her constantly!

“My heart. Sofa day today I think though!”

It comes after Lucy announced the birth of her daughter on Instagram on Tuesday.

The star shared a black and white photo showing the tot’s tiny hand.

She captioned the post with a pink heart emoji.

Her followers gushed over the picture and congratulated the couple.

Another said: “So excited to see this beauty!! Congrats to you all!”

A third wrote: “Thought you’d gone quiet, congratulations to you both @lucymeck1 @ryanthomas84 and of course to Roman.”

Lucy and Ryan announced they were expecting their second child in November last year.

In February this year, the couple revealed they were having a little girl.

Speaking to HELLO! Magazine, Lucy admitted: “I had an inkling that I was having a girl, but I was a bit more unsure than with Roman.

Just a couple of weeks ago, Lucy shared a sweet family photo as she soaked up “precious memories” before her daughter arrived.

She said alongside a pic of herself, Ryan and Roman: “Family funday at the seaside!

“Making the most of these precious moments before this little lady arrives.

“I cant help but feel guilty as I know I won’t be able to give my full attention to Roman anymore, but I know he will love his baby sister so much & they will be so close only 2 years apart!”