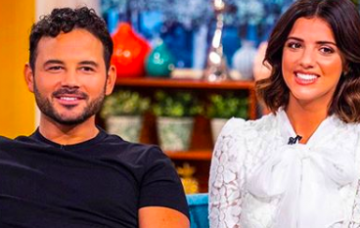 Fans were worried the pair had broken up

How many of us have started a night out smiling, and ended up alone in a taxi having a little weep?

Ryan Thomas is being oh-so relatable, after he left a party on his own – and apparently crying – on Wednesday night.

The CBB winner had arrived at the Specsavers event earlier in the evening with his girlfriend Lucy Mecklenburgh, but she left before him, sparking speculation the pair had fallen out.

The Mail Online claimed the soap star “appeared to be in tears as he put his hand to his face while sitting in the back of a black cab alone”.

But Lucy’s reps have confirmed to ED! that the former TOWIE star left because she was ill.

They told us: “Lucy left early due to having flu. She stayed as long as she was able to as she didn’t want to let anyone down.”

Ryan’s reps have not yet responded to a request for comment, and fans were still speculating on why he appeared so emotional, despite smiling in other shots from the evening.

One commented: “Him and Lucy are so mismatched, she can do better than him, at least in the looks dept.”

A second wrote: “You must have been aware that Lucy doesn’t stay with any of her boyfriends for too long.”

Another added that he didn’t look too happy, even before the former TOWIE star left, writing: “He looks miserable on the arrival photos!”

The 34-year-old Corrie star kept quiet on social media on Thursday morning, only adding shots from earlier in the evening.

Lucy, 27, however, posted several pictures – and even complained about the headlines.

Then she addressed the rumours directly, writing: “When you have cold/flu and the press try to turn it into a row with your boyfriend…”

She also added some candid shots from the evening with Ryan, including one funny video where she tried to take a selfie and Ryan “photobombed” her.

Ryan’s been dating the 27-year-old since they met while filming Celebrity Island With Bear Grylls on Channel 5. They confirmed their relationship in July 2017.

She supported him through his win on Celebrity Big Brother and on Sunday Lucy posted loved-up family snaps with Ryan and his daughter Scarlett from a previous relationship.

The three were in Blackpool at the Pleasure Beach and posed for a cute picture.

The reality star captioned it: “Yep they tricked me into going on the biggest scariest rollercoaster 🎢😅🤦🏽‍♀️🙄 and laughed at me screaming hysterically 🤣😭.”

Maybe Ryan was just really worried about his girlfriend? Or maybe the camera flashes were just getting in his eyes…?

What do you think was going on with Ryan? Leave us a comment on our Facebook page @EntertainmentDailyFix and let us know what you think.