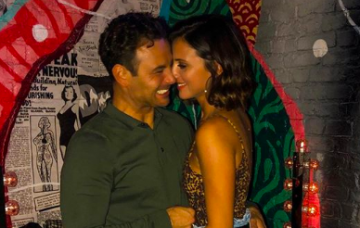 These two do make us laugh

Proving they’re just like every other couple, Lucy Mecklenburgh and Ryan Thomas have shared a series of videos showing them bickering on a long car journey.

In fact, after the former TOWIE star did an Ask Me Anything with her followers, she ended up calling her boyfriend an “idiot!”

The pair, who met a year and a half ago on Bear Gryll’s Channel 4 show Celebrity Island, were heading on a trip on Wednesday evening when Lucy, 27, told her fans they could ask them questions.

After revealing that Mykonos was their favourite holiday destination as: “it was our first holiday, and we have been 4 times”, Lucy asked her boyfriend: “How long have we been together?”

The fitness expert moaned: “You know! Don’t be like that!” Ryan, best known for playing Jason Grimshaw in Coronation Street, relented, saying: “A year, a year and a bit.”

They bickered again when a fan asked how much time they spend together.

“How often do we see each other?” Lucy asked him, as he replied: “Too much.” She scolded him: “You can’t say that! We’re with each other most of the time aren’t we?” Ryan smiled and said again: “Too much!”

The reality star also labelled him an “idiot” after asking what the worst part of being on Bear Grylls’ show was.

He laughed and cheekily told her: “Probably watching you go from a nine out of ten, to a solid four.”

Lucy replied: “He’s such an idiot,” adding: “You told me I was beautiful with no make up on!”

Read more: Lucy Meck posts cute (and spooky) selfies from night out with Ryan Thomas and his brother

The pair have been dating since July 2017, after meeting on the reality show.

Lucy helped the 34-year-old through his rocky time in the CBB house and they’ve been inseparable ever since.

But they battled split rumours last month, when the couple left a party separately, with reports claiming Ryan was in tears.

The Mail Online claimed the soap star “appeared to be in tears as he put his hand to his face while sitting in the back of a black cab alone”.

But Lucy’s reps confirmed to ED! that the former ITV star left because she was ill.

They told us: “Lucy left early due to having flu. She stayed as long as she was able to as she didn’t want to let anyone down.”

Basically, all car journeys should be banned, forevermore. It would save so many relationships.

Do you bicker with your partner? Leave us a comment on our Facebook page @EntertainmentDailyFix and let us know what you think.