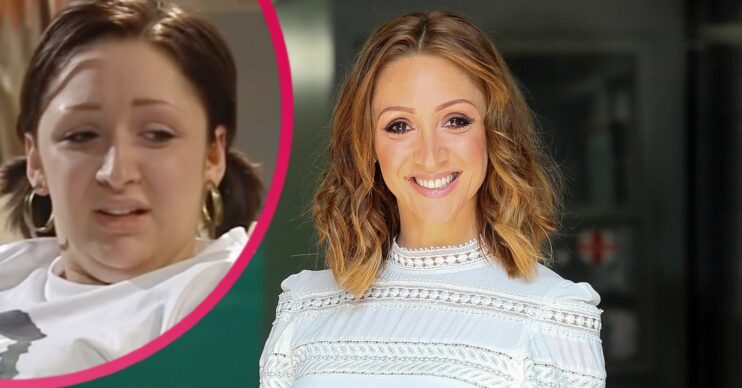 The actress slimmed down ahead of her wedding in 2009

Lucy-Jo Hudson has stunned fans with her weight loss since first appearing on screens as a Katy Harris in Coronation Street.

The 38-year-old actress, who currently stars in Hollyoaks, made her debut on the soap back in 2002.

But how has Lucy-Jo achieved her weight loss over the years?

During her time on Corrie, the actress found herself at the centre of one of the show’s most-talked about storylines.

Her character struck up a relationship with Martin Platt, who was 20 years older.

Katy then went on to kill her father after he convinced her to abort Martin’s child.

But it was Lucy-Jo’s impressive weight loss that really caught the attention of fans.

The actress has always been fit and healthy, having previously trained as a professional dancer.

However, she decided to shed the pounds ahead of her wedding to Corrie co-star Alan Halsall.

In the lead up to their wedding day, Lucy made it her mission to lose weight.

At the time, she told the Daily Mail: “I lost weight because every bride wants to look their best so I started looking after my health more. I started exercising too and I’ve sort of kept it up.

I lost weight because every bride wants to look their best

“Cardio never seemed to work with me but now I do a lot more resistance work, with weights and squats and lunges. I think the more muscle you have, the more fat you burn.”

As a result, Lucy-Jo went from a size 14 to a size eight – and lost an incredible two stone!

And it wasn’t without some changes to her diet.

What did Lucy-Jo eat to lose weight?

She also admitted to snacking during work.

Instead, the actress now opts for smaller, lighter meals.

She explained: “Now I eat little and often instead of having big meals. I’ll have six mini meals a day just to keep the metabolism kicking in.”

However, Lucy-Jo doesn’t deprive herself of sweet treats and chocolate.

The star continued: “I don’t deprive myself – I love chocolate so I have a little bit of it every day. It helps not being a big drinker too because if I was drinking a lot I would be bigger.”

How has Lucy-Jo maintained her weight loss?

While Lucy-Jo has worked wonders to transform her figure, she’s also managed to keep the weight off.

The star looked just as incredible after giving birth to daughter Sienna-Rae in 2013.

Following her split from Alan in 2018, she also reportedly hired a personal trainer to help with a series of intense workouts.

At the time, a source told The Mirror: “She was scared her diet and fitness might slip after the breakdown of her marriage and decided to enlist the help of a personal trainer to keep her mind and body healthy.”

Lucy-Jo has since welcomed a son with partner Lewis Devine.

The actress gave birth in February 2020 and often shows off her post-baby body on Instagram.