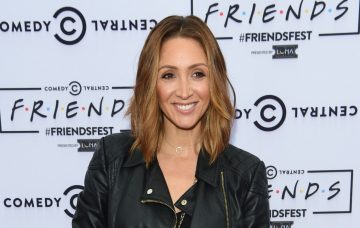 Lucy-Jo Hudson celebrated Halloween by dressing up with her daughter Sienna-Rae.

The former Coronation Street actress took to Instagram on Wednesday to share a photo of herself and her little girl sporting matching Halloween makeup and funky looking wigs.

Lucy-Jo, 35, told her fans that she and Sienna-Rae, five, had an “awesome night” and gushed over how “proud” she is of her daughter.

The photo sees the pair pulling funny faces as they show off their costumes.

Lucy-Jo, who played Katy Harris in the ITV soap, captioned the post: “HAPPY HALLOWEEN. What an awesome night Sienna and I have had….. she cracks me up so much, and makes me so proud!

“Best line of the night ‘why did that lady give me a biscuit? Does she not like sweets?’ awesome night!!! Make up ‘inspired’ by Sienna herself… she wanted eyelashes, flowers and a spider.”

Fans couldn’t get enough of the photo with one person gushing: “You look so much alike @lucyjo_hudson, beautiful.”

Another wrote: “You both look brilliant. I hope you had a great night,” while a third said: “I cannot love this more!!”

The pair revealed they were divorcing in May this year and in a statement issued by Lucy-Jo, she said they remain friends and devoted parents.

Alan, who plays Tyrone Dobbs in the soap, enjoyed some Halloween festivities himself with his little girl earlier this month.

Today with my princess & George (the teddy) we’re picking our pumpkins 🎃 to carve! #makingmemories #👨‍👧💖

The adorable pic sees the pair strolling hand-in-hand through a pumpkin farm.

Alan had previously explained to fans that Sienna-Rae had brought home a teddy from her school and she had to visit a string of places and take pictures with the soft toy.

He captioned the post: “Today with my princess & George (the teddy) we’re picking our pumpkins to carve!”

How did you celebrate Halloween? Let us know what you think by leaving us a comment on our Facebook page @EntertainmentDailyFix!