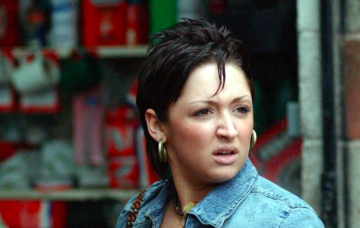 It is a massive difference to Corrie's Katie Harris

Coronation Street star Lucy-Jo Hudson has made her debut in Hollyoaks.

The actress used to play tragic Katie Harris from 2002 to 2005 before her character ended her own life.

She joined the Channel 4 soap earlier this year but up until now her role had been a closely guarded secret.

All that was confirmed was that she would join with her teenage son Romeo in a ‘decent’ role.

It has now been revealed that she is playing Donna-Marie Quinn, the mother of James Nightingale’s secret son.

Donna-Marie was revealed as the sex worker James was forced to sleep with by his dad Mac.

Mac discovered his son was gay when he turned 16 and instead of being accepting, he hatched a vile plan.

Forcing James to sleep with Donna-Marie, he gained himself a grandson when she fell pregnant.

But when James’ mum Marnie found out she did everything she could to keep the secret.

Marnie first paid Donna-Marie to have an abortion thinking she was doing the right thing.

But when that failed she was blackmailed by Donna-Marie and ended up paying her £100,000 to stay quiet about the baby.

Eventually Donna-Marie returned and her demands for money put the Nightingales into serious debt.

That in turn led to James setting up Kashif Maalik for embezzlement and sparked the bitter feud that has seen him accused of Kyle’s ‘murder’.

Romeo finally turned up at the end of the episode, which will be shown on Channel 4 on Monday, but opted not to introduce himself to his dad.

But it can only be a matter of time before that happens.

Were you shocked by the reveal? Leave us a comment on our Facebook page @EntertainmentDailyFix and let us know what you think!