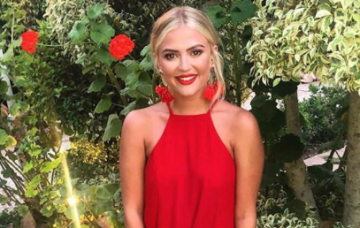 Coronation Street’s Lucy Fallon hints at appearance on I’m A Celebrity…Get Me Out Of Here!

Soap star reckons she'd be 'good in the jungle'

Coronation Street actress Lucy Fallon could be heading Down Under to join this year’s series of I’m A Celebrity… Get Me Out Of Here!

The 22-year-old dropped a massive hint that she may be setting up camp later this year, and she certainly wouldn’t be the first soap star to do so.

“I think I’d be good at the jungle,” Lucy admitted, when asked about the popular ITV reality show.

“I like to challenge myself and that’s the most challenging show you can do,” she added to the Daily Star.

It’d certainly be a timely break from the cobbles, as Lucy is once again at the centre of some very intense filming.

Bethany will discover that newcomer Kayla is actually the daughter of jailed police man rapist Neil.

It’s reported she will kidnap Bethany as part of a revenge plot after her dad was locked up for his part in the horrific grooming of the teen,

Coronation Street bosses are certainly fine with letting their actors take time out to appear in the show in Australia.

As Jennie headed off to the Australian outback, her character was sent away from Weatherfield to look after her mum, Cilla, who had suffered a nasty fall.

Another Corrie star tipped to be entering the jungle is Shayne Ward, who recently left the soap in a devastating suicide storyline.

Writing about the possibility in her OK! magazine column, Kym Marsh – who plays Michelle Connor – said: “Now that Shayne Ward has left Coronation Street, it’s rumoured he might do I’m A Celebrity Get Me Out Of Here!

“He’d definitely be entertaining if he was to head into the jungle,” she added.

“Shayne would be fun and a good sport and he’d probably sing the entire time, as that’s what he used to do all day at work.”

I’m A Celebrity Get Me Out Of Here returns to ITV later this year.

Would you like to see Lucy Fallon on I’m A Celeb? Leave us a comment on our Facebook page @EntertainmentDailyFix and let us know what you think!