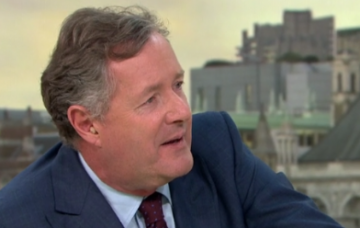 Something to tell us, Piers?!

The journalist and TV presenter doesn’t work at GMB on Fridays which may be why Zara was able to wander around his dressing room backstage at ITV!

And she wasn’t shy about sharing her findings!

Zara, 21, took to Instagram Stories to share her shock at finding a Love Island water bottle that was personalised for Piers, despite his well-known opinions on the show!

Piers has never been shy about voicing disdain for the ITV2 dating show, despite it smashing ratings records this summer.

So its no surprise Zara was rather shocked to find Piers has his own water bottle!

Picking up the water bottle, she then joked: “Piers, mate, I thought we were all half-wits?”

She then quipped: “So something I’ve learned today is that Piers Morgan is a die-hard Love Island fan!”

To be fair to Piers, the water bottle doesn’t seem used, does it?

And it’s not beyond the realm of possibility that Piers was simply sent a water bottle by the Love Island team in the hopes he changed his opinion on the show!

He’s yet to respond to Zara’s remarks.

Piers has been openly critical of Love Island since the show returned for its fourth series back in June, saying frequently on GMB that he just doesn’t understand the appeal.

He’s branded the islanders “halfwits” and “braindead zombies” in past rants, although his GMB co-host Susanna Reid is a HUGE fan and often counters Piers criticisms with her own praise for the programme.

Zara, meanwhile, was on Friday’s GMB alongside fellow ex-islanders to chat about the latest developments in the villa.

On Thursday’s episode of Love Island, four islanders were dumped in a shock twist, including Zara’s villa partner Adam Collard.

He’s now said he’s eager to reunite with Zara on the outside, but she’s warned Adam needs to make an effort if he wants a future with her.

The pair were coupled up in the villa until Zara’s shock dumping last week.

She then watched as Adam recoupled with and kissed newcomer Darylle Sargeant, before admitting to Darylle that he still had feelings for Zara.

He said after his dumping: “Zara said something along the lines of ‘I’ll be waiting outside, I’ll be waiting with ten thousand or twenty thousand kisses.’ I do really, really want to see her, I’m excited for that.”

Zara, however, told GMB that she hasn’t heard from Adam yet following his exit from the villa. And she warned: “I think he needs to pull his finger out a little bit.

“It wasn’t easy watching him kiss someone else on TV so soon after we had separated so I think he has got to pull his finger out a little bit and make some effort. The Adam I watch on TV and the Adam I got to know in the villa are two different people.

“I need to wait to speak to him in person.”

“It’s just the fact that Darylle and I are so worlds apart and the same with Rosie, we all look very different.”

Are you sad to see Adam leave? Leave us a comment on our Facebook page @EntertainmentDailyFix and let us know what you think!