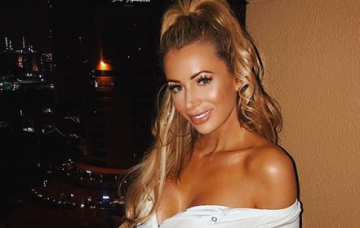 This would be some amazing casting

We saw her fall in love on telly, and then fall, er, out of love on telly. But Olivia Attwood isn’t giving up on romance.

The Love Island alumni – who split from co-reality star Chris Hughes in February – is reportedly set to appear on the new series of Celebs Go Dating.

Sources told The Sun: “Olivia will be brilliant on the show – she’s great value and genuinely looking for a new man.

“Fans of hers have been desperate to see her back on TV following her time on Love Island last year and spin-off show with Chris.

“She will start filming for the series this week and is already excited to get to know the other singletons at the mixer launch party.”

In fact, Olivia, 27, recently told ED! how much she wanted to be on the show, saying: “I would love to go on Celebs Go Dating as I’m obsessed with both Nadia and Tom.

“I get a real kick out of dating, but I’ve never been on a blind date before and I’d be keen to give it a try. I think I would be a lot of fun on a date!”

When a fan asked: “Are we going to see you on telly any time soon?” Olivia replied with an enigmatic: “You are…”

Fans were thrilled with the news, with one tweeting: “I’m excited to see @oliviajade_att has signed up for #celebsgodating as that woman is hilarious and will be great to have her on our screens again! #killitgirl #searchforlove #hopeyoufindtheone”.

It follows a year of romantic ups and downs for Olivia, who met Chris on last year’s ITV2 reality show.

The pair came in third, leaving the villa as a couple.

They went on to film their own reality show, Chris and Olivia: Crackin’ On, which followed their lives after the show.

Unfortunately, their romance didn’t last and they split during filming.

They later reunited, but controversy followed, as Chris was accused of exchanging messages with Katie Price behind Olivia’s back.

Chris always vehemently denied it, while Katie insisted it did happen.

Olivia later hinted that she and Chris could reunite one day, saying: “We basically do think that at some point in the future we are going to be able to work this out”.

But she also had a rebound fling with her ex, footballer, Bradley Dack.

Let’s hope this is true, because – let’s face it – Olivia is TV gold.

Would you like to see Olivia on Celebs Go Dating? Leave us a comment on our Facebook page @EntertainmentDailyFix and let us know what you think.