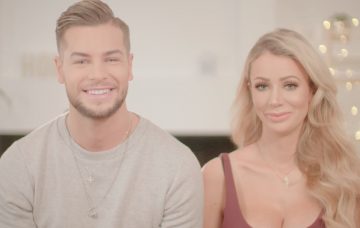 Love Island’s Olivia Atwood hints at a reunion with Chris Hughes, and reveals the real reason behind their split

It’s been a whole year since Olivia Atwood and Chris Hughes first clapped eyes on each other in the Love Island villa.

Although their relationship endured some seriously stormy seas and the fiery twosome eventually split last month, Olivia admits she still holds a torch for Chris, and their love story might not be over for good.

In an interview for their upcoming reality series, Chris and Olivia: Crackin’ On, which gives us a glimpse inside their tempestuous relationship after leaving the villa and moving in together, Olivia, 26, says, “I still protest that Chris and I are the greatest love story, and there is still to be more chapters.”

Viewers are set to see Chris, 25, splitting up with Olivia during the upcoming series, as the couple reportedly called it quits before the end of filming.

Rumours circulated that Olivia’s tweet to her ex-boyfriend, Blackburn Rovers footballer Bradley Dack, in which she complimented him on his yellow training t-shirt, was the reason behind the break-up.

But in an emotional chat, Olivia has revealed the real reason behind their split was the pressure of having a relationship in the public eye – although she says she wouldn’t rule out more reality TV!

“In a normal relationship, it’s bad enough having your mum, your dad, and your cousin giving their opinion on your partner, but try having the whole country give an opinion,” she says.

We watched their rows on-screen, and Olivia is the first to confess that she can be hard work, and reveals that she and Chris’ similar natures contributed towards the downfall of their romance.

“I’m not going to sit here and say I’m a picnic. I’d say I’m pretty hard work. I’m pretty wild so it’s a full-time job keeping me on a leash,” she jokes.

“We can both be hot-tempered, and when you put two hot-tempered people together it can be very draining.”

After admitting she’s ‘surprised’ that so many Love Island couples have stayed together, Olivia is quick to impart her words of wisdom on the next group of hopefuls hoping to find love in the villa this summer.

“It’s going to be incredibly hard and you have to get the trust from day one and protect that with your life.,” she said.

“Once you mess with the trust and respect, it’s all over. Don’t let other people get involved. It has to be you and him, and you have to be on the same team.”

Chris and Olivia: Crackin’ On is on ITVBe, Wednesday 7th March, 10pm

Will you watch the show? Leave us a comment on our Facebook page @EntertainmentDailyFix and let us know what you think!