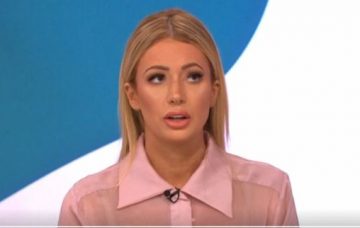 It's the end of a summer love story

Love Island’s Olivia Attwood has claimed boyfriend Chris Hughes dumped her on the PHONE after she sent “distasteful” tweets to an ex.

In an emotional interview on Friday’s Loose Women, the star said she felt “abandoned” by Chris’ decision to leave her.

“The rumours are unfortunately true. We have split this time,” she said. “Over the weekend Chris made the decision he wanted to leave the relationship.”

The couple met on Love Island 2017, where they finished in third place and have rarely left the headlines since.

Olivia, 26, said she’d been busy doing other things when Chris, 25, called her, and at first she didn’t take his break up request seriously. “You know Chris,” she said. “He’s quite reactive and he’s said it a few times in anger.”

She said Chris’ breaking point had been an incident that happened the previous week.

“I went out the week before, had a few too many drinks and sent a few stupid tweets to people, including my ex-boyfriend, which is obviously distasteful and not funny.

“It’s one of those things, when you’re out with the girls, I thought it was really funny. It’s not funny, and if Chris had done it I’d be annoyed.

“It really upset him to the point where he wanted to end the relationship.”

Olivia said she felt “abandoned” by Chris, especially as she feels she’s stayed with him through far worse, including the whole Katie Price text saga.

“I’ve taken it really hard as I’ve stood by Chris through all sorts of things that were, to me, a lot harder to swallow than the tweets,” she said.

“We’re meant to be a team. I feel a bit abandoned. It was a stupid thing to do.”

In case you don’t remember, last year Chris accused Katie of sending him flirty messages despite knowing he had a girlfriend. He claimed he didn’t reply, Katie claimed he did, and it all got quite messy.

Olivia went on to say that after that phone call she got a text from Chris saying they had filming for their upcoming reality show the next day and although he didn’t want to do it, they had signed up for it.

“I text him and said Chris, I’m really unhappy – I know we’d signed up to do a reality TV show, but for that raw moment to be filmed… I said if you.re serious about this we can follow the reality without having strangers in the room for that actual moment.”

They’ve been working on a programme called Crackin’ On, following their lives after Love Island, which will show their first meeting after the phone call.

Olivia said she felt like Chris had already spoken to the production team about their split, however, and she was playing “catch up”.

Recalling how she drove to Chris’ house after his phone call, she said: “I won’t be able to watch it and it was horrendous to live it. I wanted to wait until the cameras had gone and be with Chris on my own. It was the weirdest feeling.

“We had a conversation later on after but it’s kind of, it went on for ages. It was done then. He said I am serious.

“I’m going to remember that forever.”

She also admitted not feeling ready for the romance to be over, despite wanting to end things herself in the past,

“Even though there were times when I felt like I should have walked away, I haven’t. Now obviously he’s ready to leave the relationship, I feel like I’m not quite ready, it’s a difficult one,” she said.

Olivia told the panel she understood why some people may think it’s a publicity stunt – but insisted it is “100 per cent real” and they are “both absolutely in bits”.

“I feel awful,” she said. “I’ve been crying for three days straight and that’s not me at all. I don’t cry. It’s hit me a lot harder than I ever thought it would.”

That being said, she doesn’t think they’ll ever get back together.

“Personally I’d find this incredibly hard to come back from, just from the way I feel my emotions were handled,” she said.

“I feel like I was much more understanding with him. I find that quite hard to deal with.”

A statement from Chris was then read out in which he said: “I never wanted this playing out in public but circumstances have forced us so here we are.

“This is a message for Olivia: my heart is genuinely broken. Whatever you say on Loose Women is completely fine, you should do whatever you feel is best. I only have one thing to say which is you are one of the most special, beautiful people I have ever met.

“The experience that we have and have had together and the memories will stay with me forever. I wish nothing but the best for you. Your always, Chris.”

An emotional Olivia said the letter was confusing as it sent out mixed messages: on the one hand calling her special, but also confirming the split.

“We definitely let each other down at points.”

Are you surprised about this split? Leave us a comment on our Facebook page @EntertainmentDailyFix and let us know.