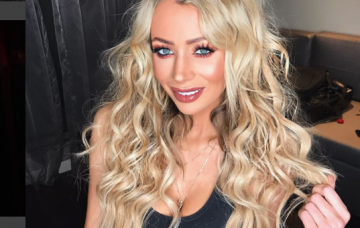 Hmmm, should Chris Hughes be worried?

His Love Island girlfriend Olivia Attwood seems to have a mystery man in her life, who fans spotted in the background of an image she shared on Instagram today.

The snap showed a sleepy Olivia sitting down in front of a mirror resting her head on a pillow with her eyes closed.

The picture was supposed to showcase the 26-year-old reality TV star’s new range of PJs.

Wearing an animal print silk nightshirt and socks, she told her 1.5m followers: “This was me today, trying to avoid adult life. New nightwear range is online now.”

But her fans were more interested in what (or rather who) they had spotted in the mirror behind her than by what she was wearing.

They could see the reflection of a man walking into the room, causing one to comment, “look at the mirror,” while another said: “anyone else notice the guy in the mirror?”

Lots of people had, as many others also asked, “who’s the man in mirror?”

Thankfully for Chris, he has nothing to worry about as Olivia soon cleared up the mystery on Twitter, albeit in a very tongue in cheek way!

She wrote: “It’s not my bedroom it’s a set. And he is actually the inthestyleUK photographer/ my secret boyfriend.”

“In The Style” are the fashion brand selling Olivia’s nightwear.

Such was the popularity of the feisty couple on Love Island, ITVBe gave them their own show, called Crackin’ On, which will air later this year.

Will you watch Olivia and Chris’ reality show? Leave us a comment on our Facebook page @EntertainmentDailyFix and let us know what you think!