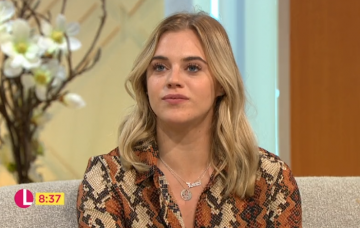 She was admitted to hospital last month

Laura Crane has said she was moments away from death after she contracted sepsis.

The Love Island star “didn’t realise” just how ill she was until her mother forced her to go to hospital but she praised medical staff for her treatment.

Speaking on Lorraine on Wednesday, she said: “I didn’t realise how ill I was… I had this crazy high temperature and my heart literally felt like it was coming out through my shirt.

“My mum was luckily coming to London to visit me – because she thought I wasn’t really replying to her texts – so she was coming up… and if she hadn’t of come, I wouldn’t have gone to hospital that day.”

“I couldn’t understand how my own body had created it, [I thought] there must be something else.

“I’ve not had a definite answer about why I got this, because I had what I thought felt like bad period pains, I felt delirious the next day and had no concept of time. But the NHS were incredible, they instantly knew something was up.”

The 23-year-old surfer admitted that the most terrifying moment about the ordeal was when her “heart rate couldn’t really stabilise” and explained that she contracted the condition due to an infected cyst on her ovary.

She said: “The first five days I was in hospital they were trying to figure out where the infection was.

“I actually started to get worse and my temperature would go really high and then really low… and my heart rate couldn’t really stabilise. That’s when it got really scary when I thought I’m completely out of control of my body.

“In the end it was actually [down to] a cyst on my ovary and one of them became infected and became an abscess and they had to drain it. It was an ordeal!”

At the end of last month, Laura was admitted to hospital with the condition – which can be life threatening.

At the time, a representative for Laura was said to have admitted the previous few days had been a “scary time” for the model and her family.

“Laura is sadly quite unwell,” they are reported to have told the Sun, adding Laura was “rushed” to hospital.

Revealing the diagnosis, they continued: “It’s taking time to control her temperature and rid her blood of the infection, but it had spread quite rapidly.

“A scary time for her and her family but we’re praying she makes a full recovery in the next couple of days.”

Did you watch Laura on Lorraine? Leave us a comment on our Facebook page @EntertainmentDailyFix and let us know what you think!