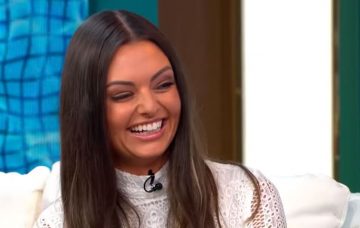 Could their flirty Aftersun behaviour become something more?!

Kendall, who was the first of this year’s batch of singletons to be dumped from the reality show on Friday, told ITV’s This Morning that she spoke to Kem on Sunday evening after they both appeared on spin-off show Aftersun.

This Morning hosts Holly Willoughby and Phillip Schofield commented on Kendall and Kem’s chemistry on the programme.

Asked if they exchanged phone numbers, Kendall giggled coyly and said: “He just sent me a couple of pictures that we had together.”

Kem won the 2017 series of the programme with then-partner Amber Davies, but they split several months later.

Somewhat awkwardly, Kendall was quizzed about Kem while sharing a sofa on This Morning with Amber’s best friend, Olivia Attwood, another former Love Island contestant.

Love Island fans had urged Kendall and Kem to go on a date after watching them on Aftersun together.

Hoping for a Kendall and Kem romance #LoveIsland2018

Kendall, who was previously engaged for five years until last year, also said she would only return to the programme for “the right reasons” – to find a romantic partner, and not “just for the sake of doing the show”.

“I was going in there to find somebody,” she said, adding that she went onto the programme in the first place “for the right reasons”.

Kendall was the first casualty of this year’s series when her partner Adam Collard decided to ditch her to couple up with island newcomer, lawyer Rosie Williams.

As he announced his decision, Adam said he had chosen Rosie because he was “attracted to her from the moment he saw her” and he felt he had not given her enough of a chance.

Adam said he cared about Kendall, but that their relationship had not progressed at a pace he would have liked after a few days in the programme’s Spanish villa.

Speaking on This Morning, Kendall said: “I think I probably could have moved quicker to try and save myself, but I definitely didn’t want to do that.

“I did want to take things quite slow.”

Which Love Island contestant is your favourite so far? Leave us a comment on our Facebook page @EntertainmentDailyFix and let us know what you think!