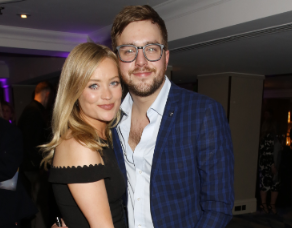 Couple are getting more serious...

He’s been keeping a watchful eye over the romance on Love Island and now it seems Iain Stirling’s own relationship is getting more serious.

The reality show’s comedic narrator is set to move in with his TV presenter girlfriend Laura Whitmore, according to The Sun.

A source “close to the pair” told the paper: “They haven’t been together too long but she wanted to buy a house. It’s their relationship getting more serious.

“Because of their busy jobs they don’t get to spend a lot of time together but this will mean  they will see a lot more of each other.

“They are very steady as a couple and it is the natural next step.”

Comedian Iain and Survival Of The Fittest presenter Laura, 33, started dating last summer after first meeting at the children’s Baftas.

They then went public with their relationship in January by posting snaps together on social media.

Speaking of how their love blossomed, Laura told the Daily Mail: “We were friendly for a while before it developed into something more, but we didn’t tell anyone for ages.”

The former Strictly star added that the romance was a slow-burner as their work commitments around the world meant they couldn’t always spend a lot of time together.

“It’s quite hard when you’re back and forth and you try and see each other as much as you can. It was slowly, it wasn’t a rush. it was a slowly developing thing. We kept it very quiet,” she said.

Meanwhile, Iain, 30, has joked that he knows he’s “punching above his weight” with his model girlfriend.

“I don’t mind it, because it just means I’ve done better haven’t I?” he told Chris Ramsey when he teased him about it on his show in March.

“I think I’ve done quite well out of it, but I’m dead happy because she’s lovely and stuff.”

Iain is currently out in Majorca following the lives of the Love Island contestants on the fourth series.

Promoting the show on This Morning before he left, he said he loves his job as he gets to watch the footage like any other fan, and then write jokes.

However, he told Eamonn Holmes and Ruth Langsford that he’ll be careful what he says about Dani Dyer, as he’s worried about her dad, EastEnders actor Danny Dyer, coming after him!

Do you think Iain and Laura make a cute couple? Leave us a comment on our Facebook page @EntertainmentDailyFix and let us know what you think!