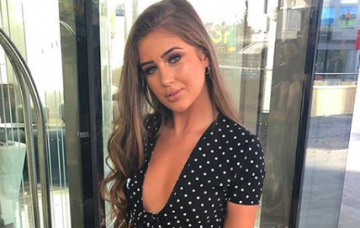 The former Love Island couple were together for three months

Love Island star Georgia Steel has admitted she was “guided” to have a showmance with now ex-boyfriend Sam Bird.

Georgia, 20, said she was told not to split from Sam after leaving the ITV dating show.

While the pair moved straight in together after quitting the villa, it wasn’t long before they became yet another Love Island couple to go their separate ways shortly after cameras stopped rolling.

Now Georgia says they would have split even sooner if she hadn’t felt pressured to stay with personal trainer Sam for the sake of her career.

When asked whether she was told that the split would be bad for her career, she revealed: “That is what happens when you come out. I definitely felt like that.”

The 20-year-old added to The Sun: “It wasn’t working, we were different people, but I really thought, ‘Oh my God, people are only going to like me if we’re together’ because that’s what you’re renowned for.”

She was then asked if she was told to stay in a relationship with Sam despite not being in love with him, to which she responded: “I was guided.”

Sam and Georgia split back in October, with the personal trainer accusing her of cheating on him with her ex-boyfriend – something she denied.

Georgia also admitted she never went into the villa to find a boyfriend, saying she only signed up because she was “bored”.

“I went in there because I was a shot girl and I was bored at drama school. They said, ‘Georgia do you want to go on this show?’ and I went, ‘Go on , I’ll give it a go.'”

Georgia also dished on her co-stars and how they changed in front of the cameras.

“Because the show’s so big I think people go in there and they can sometimes not be themselves.”