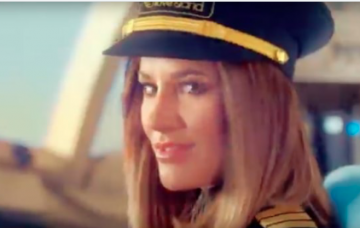 Fans are getting excited

We’ve been teased and tantalised with a clip lasting just a few seconds for the new season of Love Island, but finally the first proper trailer is here, and fans are getting a little excited.

Looking stunning in a pilot’s uniform Caroline Flack promises ‘things are about to get turbulent’ as she prepares to send a host of single guys and girls off to the sunshine for the hit ITV2 match-making show.

Fans were quick to get excited on social media after seeing the trailer air for the first time on Saturday night.

The clip, Love Island: Your Only Destination this summer, tells fans to ‘please fasten your seatbelts for the ride of your life’ before launching into the usual partying and fun had by the contestants as they get to know each other.

The images, which contain some heavy clues to the show’s line-up, are set to the song Found Love by Roger Martin featuring Maurice, and got fans of the show more than a little excited about it  ‘landing soon’.

Fans went wild on social media as soon as it dropped…

The trailer features Love Island star Chris Hughes, who seems to be making a return to the fourth series, which fans suspect will hit our screens on June 4, because Caroline tweeted a two-month countdown on April 2.

More than 60,000 people are rumoured to have applied for this series, so casting crew have had a lot of work on their hands to make sure the line-up is better than ever.

Rumour has it that they might have even signed EastEnders’ star Danny Dyer’s daughter, Dani.

Watch this space for confirmation of a start date and contestants who’ll be making it a long, hot summer on Love Island.

Are you excited about the new series of Love Island starting? Leave us a comment on our Facebook page @EntertainmentDailyFix and let us know what you think!