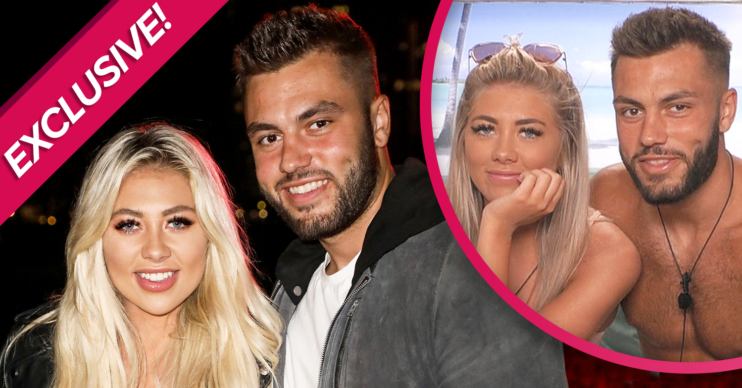 They won the first-ever Winter Love Island in February

They won the very first series of Winter Love Island earlier this year and, six months on, Finn Tapp and Paige Turley are still going strong.

The couple spent lockdown together, with Finn moving up to Paige’s native Scotland to isolate.

And it went so well that the pair moved in to their first home together in Manchester a couple of months ago.

Finn, who was speaking exclusively to ED! at Hotels.com’s Dream Screen, also revealed plans for marriage and babies.

Love is in the air for Finn Tapp and Paige Turley

“Things are absolutely brilliant with Paige,” he said.

“We’ve moved into Manchester now, we’ve been there a couple of months, and we’re loving it. Things are going really well.”

Asked if the pair had fallen foul of any lockdown arguments, Finn said it was “all good”.

Paige’s only gripe was the fact he left wet towels on the floor.

“We didn’t have any arguments, it was all good, but it’s early days,” he laughed.

“Paige wasn’t happy that I left a few wet towels on the floor, but other than that it was all alright. She’s got me pretty housetrained now, I’m actually learning.”

Last week, Finn earned some serious boyfriend points when he pulled out all the stops to celebrate Paige’s 23rd birthday.

His present was a trip to Mykonos – the couple’s first holiday since leaving the South African villa.

“We are off to Mykonos in September, that was something we spoke about in the villa,” he said.

Marriage and babies is something we want to do. I guess it’s the old cliche that it happens when you feel it’s right. It’s definitely something I want to happen.

“We wanted to get out, obviously little did we know about the whole pandemic, but it’s something we’ve been speaking about for ages, trying to get away.

“Now we can finally get away it’ll be lovely. It’ll be our first trip away since Love Island so we’re really looking forward to it,” he added.

And should Paige expect a surprise proposal as they enjoy their romantic break on the Greek island?

“I wouldn’t say quite yet, but it’s certainly something in the long run that I want to do, so I suppose when the time’s right,” he revealed.

Babies, too, are in Finn’s plans for his future with Paige.

“Marriage and babies is something we want to do. I guess it’s the old cliche that it happens when you feel it’s right. It’s definitely something I want to happen,” he revealed.