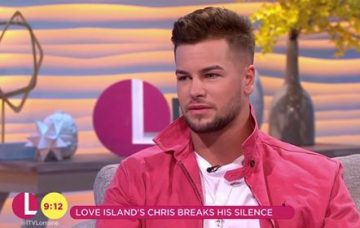 It's been a difficult time for Chris

His ex-girlfriend, Olivia Attwood, has dubbed their romance ‘the greatest love story’ on reality TV, and now it seems Love Island’s Chris Hughes has returned the sentiment, admitting he hasn’t even thought about moving on after their split a few weeks ago.

In an interview for the couple’s new reality TV series, Crackin’ On: Chris and Olivia, which sees him split with Olivia on-screen, Chris admitted, “What I had with Olivia is still very fresh.

“We’ve only been apart for a few weeks. I haven’t even thought about moving on and seeing other people.”

Reflecting on his Love Island experience a year on, Chris, 25, reminisced about “meeting a girl who I fell in love with and I’ve never felt so strongly about a girl in my life.”

He added “falling in love and meeting someone in a different environment and having her mean so much to me” was the highlight of his year.

Since meeting in the villa, the couple endured a fiery relationship, dogged with rows and rumours of cheating on both sides, before Chris finally ended their romance – after seeing Olivia’s flirty tweets to her footballer ex on a boozy night out.

Chris was also caught up in a headline-making ‘scandal’, when Katie Price claimed he had been texting her behind Olivia’s back.

He vehemently denied every replying to messages she’d sent.

Chris gushed: of Liv “The worst part of our relationship was that I loved her so much.”

“She’s so loving and caring so it’s nice to have a girlfriend who is like that. The best thing about our relationship is that when we got on and things were going well, they were really good.”

He added, “We’d have an amazing day, having fun non-stop. Then when I got home at the end of the day, I would really appreciate what we had together.”

Unlike Olivia, who admitted she would give Love Island another shot, Chris says he won’t be returning to the ITVBe show that made his name.

“Love Island was a one-off experience for me. I’m not thinking about relationships with anyone else at the moment,” he said.

Appearing on ITV’s Lorraine on Wednesday morning, Chris admitted he would “never say never” about reuniting with Olivia.

However, he was adamant that certain things would need to change.

“We’re still talking, we talk every day. I’m still obsessed with her. No-one has fallen out of love, well I haven’t certainly, and I still love her like I loved her before. But we have to make sacrifices if this relationship is to ever rebuild again.”

Chris and Olivia: Crackin’ On starts Wednesday at 10pm on ITVBe.

Do you think Chris and Olivia should give their relationship another shot? Comment on our Facebook page @EntertainmentFixDaily and let us know what you think!