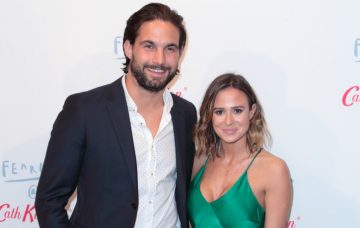 Former Love Island contestant Camilla Thurlow has landed her very own reality show called What Camilla Did Next.

The 28-year-old has announced she’ll welcome the cameras back into her life for a new ITVBe programme documenting what happened after she left the famous villa back in 2017.

Camilla’s programme will focus on how she’s using her newfound fame to raise awareness of humanitarian issues close to her heart, primarily the ongoing issue of landmines.

Viewers will watch Camilla returning to Cambodia, where she used to work for the mine clearance charity, HALO Trust, ahead of her Love Island appearance.

We’ll also get insight into Camilla’s life with boyfriend Jamie Jewitt, whom she met while appearing on Love Island 2017.

ITVBe has said the programme will show how Camilla must leave Jamie behind in the UK when she travels to Cambodia, and how she must juggle her romance with her passion for making the world a safer place.

The couple were recently hit with split rumours but rubbished the speculation by putting on a united front together at a red carpet event. Phew!

Camilla drew plenty of attention on last year’s Love Island as she wasn’t what might be described as a ‘typical’ reality show contestant, having previously dated Prince Harry and working as an Explosive Ordnance Disposal expert in former war zones.

Camilla previously explained how she signed up for Love Island after working abroad for most of the year left her with little personal life.

“My job had taken me away for a long time to far-flung places where life is tough,” she told You magazine earlier this year.

“It had changed me – made me too self-sufficient – and I was finding it hard to fit back into normal life. Someone from the programme saw me on social media and got in touch, and I thought it sounded like a challenge.”

An exact air date for Camilla’s show has yet to be confirmed.

Are you excited to see Camilla’s new programme? Leave us a comment on our Facebook page @EntertainmentDailyFix and let us know what you think!