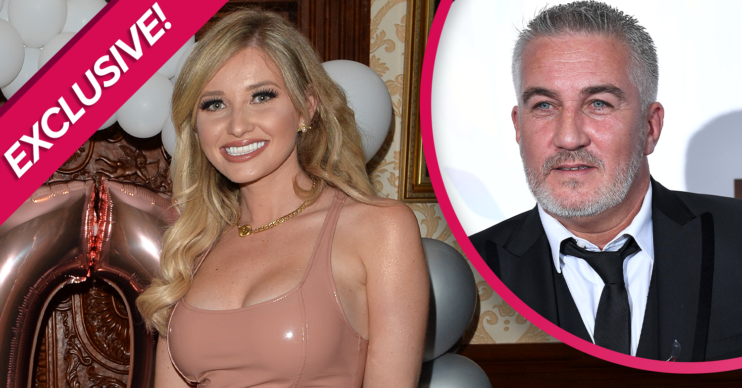 We have a feeling she's after more than a handshake…

Unlucky in love Amy Hart – who rose to fame on 2019’s Love Island – seems to have a bit of a thing for older men.

Earlier this week, 27-year-old Amy declared her love for GMB weatherman Alex Beresford, who is 39.

Now she’s got a pretty famous silver fox in her sights and it appears she’d love to stare into his hypnotising piercing blue eyes.

Yes, Great British Bake Off star Paul Hollywood is the man Amy has set her sights on.

And, it appears, she’s after more than his famous Hollywood handshake.

What has Amy Hart said about the GBBO star?

With a twinkle in her eye, she added: “He’s single again, isn’t he?”

Sadly for Amy it’s been reported that Paul has moved his new barmaid lover, Melissa Spalding, 36, into his Kent home.

It comes after his split from 25-year-old barmaid Summer Monteys-Fullam, which followed the break down of his marriage to wife Alex.

So, it appears, while Amy has a thing for older men, Paul feels the same about younger women.

Asked if there was any profession Amy would rule out when it came to dating, we’re pleased to reveal chefs are on her list.

In fact, she’s ruling no one out.

“I’m like a holiday in Benidorm, I am all inclusive. But I’m big into my politics, as you may know from my Twitter,” she said.

She loves her food

Another thing that might attract ladies’ man Paul to Amy is her appetite.

Not that you’d know it to look at her slender shape, but Amy loves her food.

In particularly fast food if her go-to McDonald’s order is anything to go by.

“The standard order is a quarter pounder with cheese and a Coke with no ice,” she said.

However, then came the foodie surprise.

“If it’s a snack, I’ll have a double cheeseburger,” she continued, “and if I’m particularly hungry, I’ll have a chicken nugget meal with two hamburgers on the side.”

If Paul likes his ladies with a healthy appetite, he knows who to call.

However, there is some bad news for the GBBO lothario.

With thanks to OnlineCasinos.co.uk, who exclusively shared their interview with Amy with ED!.