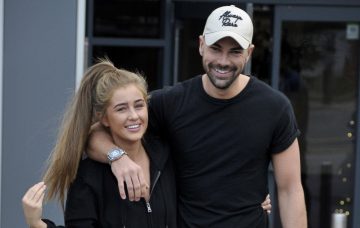 Personal trainer Sam, 25, has confirmed he and Georgia have gone their separate ways, but he “can’t bring [himself]” to divulge the reason for their break-up.

He wrote on Twitter: “I’m devastated to announce me and Georgia have split up for reasons I can’t bring myself to comment on at the moment. As always I wish her all the best (sic)”

Georgia, 20 – who was known in the villa for her constant use of the word “loyal” – took to her Instagram Stories to confirm she and Sam had split.

In a post, she wrote: “I’m very sad to say me and Sam have split. I will always care about him. However please understand this is a hard time for us both. Thank you. (sic)”

Following Sam’s Twitter post, he was inundated with words of support from several former Love Island stars, including Chris Hughes.

He wrote: “Chip up buddy. More happiness around the corner. Keep smiling and upbeat. X (sic).”

News of the former couple’s break-up broke on Wednesday night, just one day after they were pictured together at the ITV Palooza event in London on Tuesday.

This comes just a month after Sam said he will be “saving for years” to make enough money for the engagement ring Georgia wanted.

When asked if engagement is on the cards for the pair, Georgia exclusively told BANG Showbiz: “Ooh, I don’t know…”

Sam added: “The ring she wants, I’ll be saving for years!”

They are the fifth couple from this year’s Love Island to split once filming ended: Laura Anderson and Paul Knops, Jack Fowler and Laura Crane, Ellie Brown and Charlie Brake, and Samira Mighty and Frankie Foster all broke up after the cameras stopped rolling.

The show’s winners, Dani Dyer and Jack Fincham, are still together, as are Wes Nelson and Megan Barton Hanson, Josh Denzel and Kazimir Crossley, and Adam Collard and Zara McDermott.

Are you surprised about this split? Leave us a comment on our Facebook page @EntertainmentDailyFix and let us know what you think!