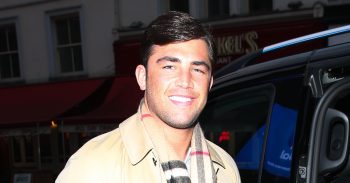 He posted on Instagram about 'challenge' of controlling his response

Reality TV star Jack Fincham has hit back after snaps emerged of his ex Dani Dyer kissing another man in London.

The pair won the hearts of the nation with their whirlwind romance on last year’s Love Island.

“We’re building [the relationship] back up slowly. We’d both moved out of our areas and to Wapping together, where we had none of our home comforts.”

It wasn’t enough and earlier this month, Jack confirmed they were no longer together.

Yesterday, The Sun published pics of Dani passionately kissing her new man, Sammy Kimmence, in Chelsea – all but confirming that she’s finally moved on.

And Jack responded with a savage but somewhat cryptic message on his social media.

The reality star posted a photo to his Instagram stories with a quote that read: “When you can’t control what’s happening, challenge yourself to control the way you respond to what’s happening. That’s where the power is.”

Similarly, on Twitter Jack appeared to aim a subtle swipe at Dani by ‘liking’ a tweet from a user who took his side in the split.

The Twitter user told Jack she had been blocked by Dani, adding: “All I can say is @jack_charlesf you got a lucky escape.”

Loved being blocked by Dani for pointing out the obviously. All I can say is @jack_charlesf you got a lucky escape pic.twitter.com/nFDkeUfDHx

Dani, whose dad is EastEnders star Danny Dyer, opened up earlier this month about the difficulties of maintaining a relationship in the public eye.

Appearing on Channel 4 show Sunday Brunch following the split, Dani said: “It’s really tough having a relationship in the public eye because you sort of go from one thing to another.

Read more: Jack Fincham slims down after being told he’s ‘obese’ by doctor

“You’re in such a bubble and everything’s so perfect, then you come out [of Love Island] and you’re like, ‘OK, this is real.'”

She continued: “We broke up earlier this week. It’s just one of those things, isn’t it? I’m OK. As well as you can be. We’ll always remain friends and stuff.”

Were you hoping to see Dani and Jack get back together? Leave us a comment on our Facebook page @EntertainmentDailyFix and let us know what you think of this story.