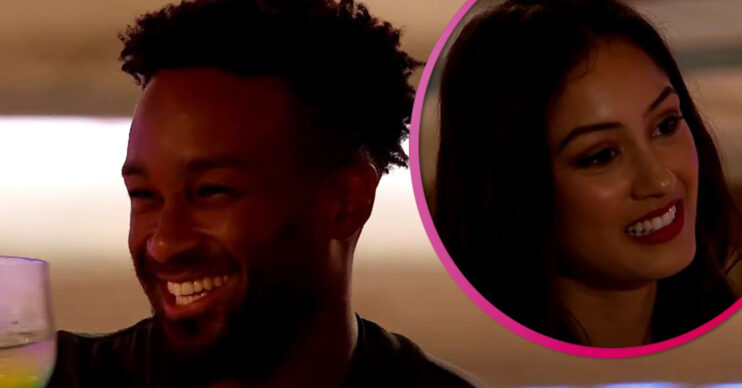 Things got pretty heated in the last few episodes of the show, with Faye Winter embroiled in a row with Teddy after a movie night revealed new information about his time in Casa Amor.

Teddy, meanwhile, insisted nothing had happened and that Faye was overreacting.

Whoever is right here, it seems Teddy isn’t taking too long to find out.

New footage ahead of tonight’s episode shows that Teddy will be heading out on a date with another girl as two new bombshells enter the villa.

Tonight’s episode will see the current islanders make the difficult decision of who has to leave the villa as a new boy and new girl arrive.

Medical student Priya Gopaldas and ex-footballer Aaron Simpson enter the villa tonight and go on dates with Teddy and Chloe.

23-year-old Priya and 26-year-old Teddy sit down for a romantic evening meal. Meanwhile, Faye tries to keep her cool.

She adds that Priya seems like a nice girl who you could “take home to your mum”.

Chloe goes on a date with footballer Aaron

Meanwhile, Chloe goes on a date with 24-year-old Aaron – who most recently played football for Sutton United.

Aaron says: “A lot of people have an assumption of me as being a typical player but I got all of that out of my system when I was younger.

“Now, I’m a lot more laid-back when it comes to dating.”

Will you be watching Teddy on Love Island tonight? Leave us a comment on our Facebook page @EntertainmentDailyFix and let us know what you think.