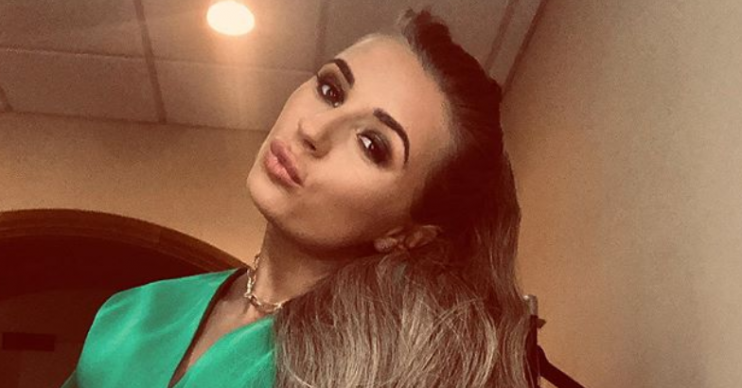 Dani Dyer has sparked engagement rumours despite only hooking up with her new man a few weeks ago.

The Love Island winner, 23, showed off her toned bod in a selfie on social media but some eagle-eyed fans locked on to one particular detail.

Taking to Instagram, Dani uploaded a snap of herself in a bathroom sporting a summery yellow bikini, captioning the pic: “Long creative nights. Sunny beautiful days.”

But some of her followers noticed she appeared to be wearing an engagement ring.

One said in the comments: “Err [wearing] a ring on your engagement finger?? Ooops.”

A third asked: “Ring on the finger @danidyerxx?”

Someone else said: “Are you engaged, Dani?”

But of course, we can tell from the photo that Dani took the snap in a mirror, which means the image is reversed and the ring is therefore on her right hand – not the ring finger on her left.

Fans were wondering if she’d decided to tie the knot early with new man Sammy Kimmence, whom she is believed to have dated previously.

Jack was said to have been “very upset” when the photos emerged but was “keeping his head high”.

A spokesperson told The Sun: “Jack was of course very upset – anyone would be when they see an ex with somebody else. He is keeping his head high and focusing on work at the moment.”

Dani and Jack won the hearts of the nation with their romance on the last series of Love Island, but she’s since been accused of faking her feelings for Jack amid claims she was still in love with her ex Sammy at the time.

According to The Sun, Dani was still messaging Sammy and told him she wanted a future with him right before going into the villa, where she hooked up with Jack.

She took to Twitter to clarify the situation and quash the rumours once and for all.

Dani fumed: “How are [The Sun] allowed to write this? Like drop this leave it alone. Constant articles to bring me down when I’m trying to be happy.

“Who has game plans like that. Things don’t work out, things change but to write an article like this is just so hurtful when there’s no truth.”