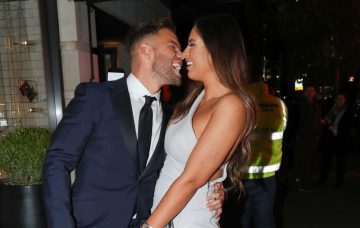 Just weeks after Love Island celebrated its first ever wedding, with season 2 runners up Alex Bowen and Olivia Buckland tying the knot, it has another marriage to add to the record – after two stars from season three got married in secret.

Jessica Shears and Dom Lever have revealed they tied the knot this week in Mykonos, sharing an adorable video via OK! Online.

The video shows the pair standing outside in the wind, side by side, as they announce their wedding.

“We’ve had the most amazing week in Mykonos for our wedding,” Dom says, before Jess announces that photos would be shared exclusively with OK!

The couple were paired up on the reality show briefly, before Jessica was eliminated. Dom followed suit a few days later.

The pair are one of two couples still together from their season of the reality dating show, along with runners up Camilla Thurlow and Jamie Jewitt.

They got married in a beautiful private villa on the idyllic Greek island, in a small ceremony surrounded by friends and family.

They have promised to share photos of their wedding next week, with a selection appearing in OK! magazine on Tuesday.

The couple opened up about their engagement earlier this year on an episode of Just Tattoo Of Us, with Dom claiming it made him feel “like a kid”.

Read more: Why Meghan’s bump size appears to change throughout the day

Jessica claimed he was so nervous he could barely get the words out.

Are you looking forward to seeing pics of the wedding? Leave us a comment on our Facebook page @EntertainmentDailyFix and let us know what you think!