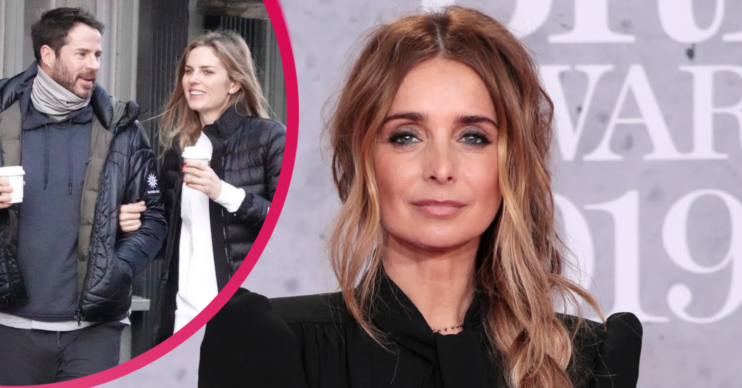 Jamie and new wife Frida tied the knot this month

Louise Redknapp has surprised fans by sharing a throwback video on Instagram, which included a clip of her ex-husband Jamie.

She was celebrating the 25th anniversary of her solo single One Kiss From Heaven, from her album naked.

The music coincided with the start of her romance with then footballer Jamie, who went on to be come her husband and father to her two sons.

Louise shared photographs and a clip from the video, which features Jamie alongside other celeb pals of Louise.

She wrote alongside the post: “One Kiss From Heaven turns 25 years old today!!!!

The former footballer recently tied the knot with his pregnant girlfriend in London.

Louise‘s friends reportedly revealed exactly how the star is feeling after the surprise nuptials.

According to New magazine, Louise was “shocked” as she only found out about Jamie‘s wedding recently.

An insider explained: “She has struggled with it. She only knew because the boys were there.

“She didn’t have time to prepare because Jamie wanted to be married before the baby was born.”

Read more: What happened when Louise Redknapp was on Strictly? Was the curse responsible for her split from Jamie?

The source went on to explain that Louise is experiencing “very mixed emotions”.

In addition, they added: “In one respect she’s happy for him and she knows they have to move on, but part of her is finding it very tough because the family’s adjusting, there’s someone new and there’s going to be a new baby.”

ED! has contacted Louise’s representative for comment on this story.

While Jamie has moved on with new wife Frida, he previously shared 19 years with Louise.

The former couple parted ways in 2017.

Since their split, the mum-of-two has spoken openly about their marriage on several occasions.

She has struggled with it

She also hinted that Strictly led to the breakdown of their marriage.

In her book, You’ve Got This, Louise admitted: “If I’d done the show four years earlier, this wouldn’t have happened. I wouldn’t have walked away from my marriage.”

Louise and Jamie welcomed sons, Charley, 17, and Beau, 12, during their marriage.

Meanwhile, Jamie and Frida tied the knot at Chelsea Registry office on October 18.

Following the intimate ceremony, Harry Redknapp posted a snap of the couple as they celebrated on the day.

In the picture, newlyweds Jamie and Frida were seen cutting their wedding cake.

Alongside the image, former I’m A Celebrity winner Harry wrote: “Celebrating with friends and family for Jamie and Frida’s wedding.

“What a day we had sharing your special day.”

The couple are expecting their first child together later this year.