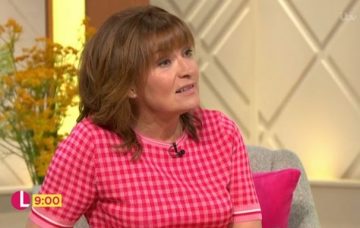 She shared fond memories of the late Supermarket Sweep presenter

Lorraine Kelly has shared her shock and sadness over the death of friend Dale Winton.

The legendary Supermarket Sweep presenter died at his home on Wednesday, aged just 62. A cause of death has yet to be publicly revealed.

Reacting to the sad news on Thursday morning, Lorraine admitted she initially thought reports of Dale’s death were a hoax.

“It just feels weird to see that headline. That he’s dead at 62. I thought it was a hoax. You know you get that sometimes on social media and think, for goodness sake, that’s just horrible,” she said.

“He was only 62. And we remember him with huge affection.”

Lorraine acknowledged how Dale had previously covered for her on the ITV show when she was away, saying: “He was absolutely brilliant. He really was, he was fantastic.”

After clips of Supermarket Sweep were played, she added: “I’m watching that smiling. It just makes you smile. I think any time you’re at the supermarket check out and hear that beep you’ll just think of him. It’s really sad.”

Ross also recounted how Dale’s mother, Sheree, died from an overdose when he was just 21.

Lorraine said: “[Dale] had a hard time. On the outside looking in, you’d think he’s got it all, it’s all fine. But everyone is battling their demons and trying to get on as best they can.

“What’s good is everyone remembering a really decent bloke. A good guy. There wasn’t a bad side to him.

“I loved Hole In The Wall. Only he could make that work. He had something about him. He wasn’t afraid to laugh at himself. It was really endearing. He was the first one to make the joke.”

Dale’s death was announced on Wednesday night by his long-term agent, Jan Kennedy.

A statement said: “It is with great sadness that we can confirm the passing of Dale Winton who died at home earlier today. While we know many will share this terrible loss, we ask that you respect the family’s privacy at this time of grief.”

Dale also hosted National Lottery show In It To Win It and Hole In The Wall. He returned to screens earlier this year with travelogue Dale Winton’s Florida Fly Drive on Channel 5.