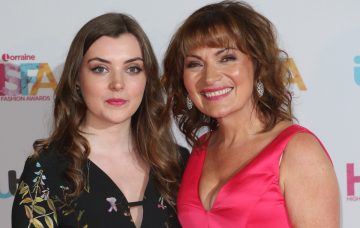 Her daughter is working in Singapore

Lorraine Kelly has recalled the moment her daughter Rosie left home for university before going to work in Singapore.

The talk show host, 58, admitted she “cried all the way home” after dropping her daughter to university in Edinburgh six years ago.

Lorraine also revealed she has kept Rosie’s bedroom “exactly the same” since she graduated and left to work in Singapore so it feels “that she will come back home any second”.

In a column for The Sun, Lorraine wrote: “After she graduated and then left to work in Singapore (where she has been for more than two years) I’ve kept her room exactly the same so that it feels that she will come back home any second.

“I miss her but I’m so proud that she had the gumption and confidence to travel and work abroad.”

Lorraine said it was “tough” to let her daughter go, but she needs to let her “fly”.

The doting mum added: “Thank the Lord for WhatsApp video calls. The time difference in Singapore means I can talk to her during her lunch hour when I’m on the way to work early in the morning.”

Lorraine’s comments come after TV chef Gordon Ramsay admitted he wore his son Jack’s pants after he went to university.

Gordon said it was only when he put the garments on that he realised how much he wanted his son, who is studying at Exeter University, to be back home.

Meanwhile, earlier this year, Lorraine opened up about her daughter’s decision to move from the UK to Singapore to work for a children’s charity.

She told Prima magazine: “I guess the move [to London] is brave but what I think is braver is my girl.

“She was 21 when she moved to the other side of the world for work and is embracing a new culture in Singapore. She’s being an independent woman doing amazing things.

“It’s hard when children leave home anyway, but luckily her lunch hour is 6am for me so I can FaceTime her while I’m getting my hair done.”

Did you struggle with your child/children went off to university? Leave us a comment on our Facebook page @EntertainmentDailyFix and let us know what you think!