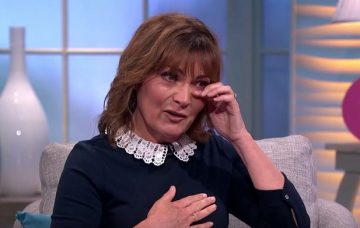 What a lovely surprise!

The 58-year-old had been leading an interview about Mother’s Day when she was surprised with a video message from her daughter Rosie, who is currently abroad, and a video from her beloved dog Angus.

Lorraine couldn’t hold back the tears as she listened to both messages, appearing utterly shocked that the team had recorded them without her knowing!

She was visibly moved as Rosie told her: “Happy Mother’s Day, mum! Sending you lots of love from Laos. I hope Angus gives you lots of cuddles.”

A message from Angus then played. Well, a picture of Angus came up on screen along with a few words from ‘him’.

Lorraine wiped away tears and said: “Oh, that is so nice. Oh my goodness me. I’ve gone. Completely.”

Lorraine added of Rosie: “Just seeing her wee face was so nice as you know I miss her.”

Rosie, 23, is Lorraine’s only daughter with husband Steve Smith.

In an interview with Dundee’s Evening Telegraph back in January, Lorraine explained that Rosie is currently living in Singapore working for a children’s charity.

Lorraine said: “I miss her like crazy but it’s given us a great excuse to go and visit her several times.”

It’s been a family-orientated couple of days for Lorraine, who marked her dad John’s birthday on Thursday’s show with a rare picture of her as a baby.

She told viewers: “This is shameless but it’s my dad’s birthday today. So dad, happy 77th birthday! I can’t believe he’s 77 – he looks great.”

A photo then flashed up showing a baby Lorraine being cradled by her adoring dad.

She said: “I want to show everyone, that’s probably the earliest picture of me and my wee daddy. Wasn’t he cool? How cool is he?

“Do you know what? What he’s wearing, [fashion expert] Mark Hayes would probably wear that now!

“And the hair! He doesn’t have quite as much hair now but it doesn’t matter! Happy birthday dad. Have a fantastic day. A great day. And I’ll see you at the weekend.”

Lorraine has frequently spoken about her close bond with father John, once describing him as her “hero”.

How will you be celebrating Mother’s Day? If at all! Leave us a comment on our Facebook page @EntertainmentDailyFix and let us know what you think!