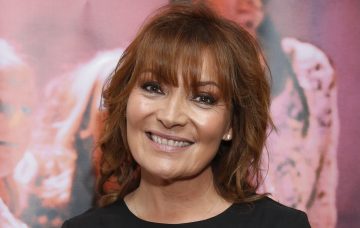 Lorraine Kelly couldn’t wipe the smile off her face as she spent the evening with daughter Rosie.

The television favourite’s only child with husband Steve Smith has been living over in Singapore while she works for a children’s charity.

But on Tuesday night, Rosie was back in the UK and reunited with her famous mum as they enjoyed a rare night out together.

Lorraine, 58, struck a pose with Rosie, 23, as they both held glasses of champagne while attending An Evening With Chickenshed at the ITV Studios in London.

Lorraine has often spoken of her pride in Rosie, whom she keeps in contact with via FaceTime while she’s abroad.

She also told Dundee’s Evening Telegraph in January: “I miss her like crazy but it’s given us a great excuse to go and visit her several times.”

Lorraine was left in tears on Mother’s Day when she was surprised with a video message from Rosie.

She couldn’t hold back the tears as she listened to the message, appearing utterly shocked the team had recorded it without her knowing!

She was visibly moved as Rosie told her: “Happy Mother’s Day, mum! Sending you lots of love from Laos. I hope [your dog] Angus gives you lots of cuddles.”

She added: “Just seeing her wee face was so nice as you know I miss her.”

Have your kids ever moved abroad? How did you cope? Leave us a comment on our Facebook page @EntertainmentDailyFix and let us know.