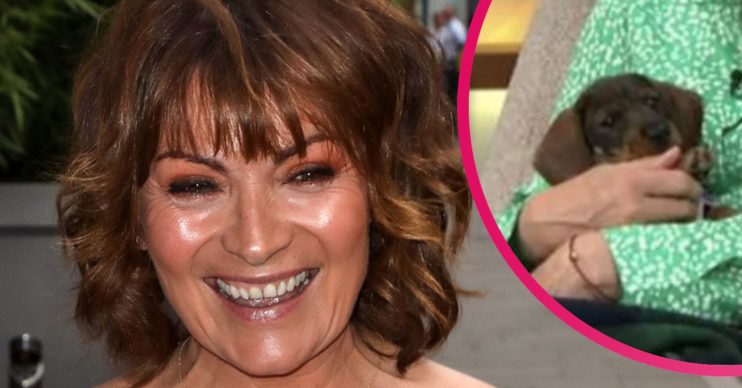 Lorraine Kelly has been called out on Instagram by dog lovers over dressing her daughter Rosie’s puppy up.

The Lorraine host, 61, posted an adorable snap of the tiny Dachshund puppy onto social media.

The wee pup is wearing a ballerina’s outfit, which Lorraine said she was only sporting for the photo.

Taking to Instagram, the telly host captioned the snap with: “So cute! Our Ruby in her finery – only for a wee pic.”

While dozens cooed over how “cute”  and “adorable” the puppy looked, others appeared to take offence.

One user posted: “Sorry it’s a dog not a child,” while another simply responded with: “Poor dog.”

Yet another user commented: “She’s lovely but don’t like dressing dogs up sorry.”

A fourth user claimed: “Not even for a photo… she’s not a doll, she’s more gorgeous in her own design.”

However, others gushed over little Ruby.

One person said: “Soooo cute,” while another wrote: “Such a cutie!”

According to the PDSA, it is only advisable to put clothes on dogs if they need to keep them warm.

For example, if they are going out in heavy rain or freezing temperatures, it may be appropriate for them to wear a coat.

On their official website, they advise: “We think pets are adorable just as they are, so our advice is simple – if the clothes aren’t designed to keep them warm or safe, then it’s best to avoid dressing up your pet.

Lorraine’s daughter Rosie returned from working in Singapore to move back to the UK during lockdown.

During this time she’s bought puppy Ruby, who has even visited the Lorraine studio.

During the puppy’s debut on television, she wore a knitted jumper.

This also troubled some fans, with some tweeting that the puppy looked uncomfortable.

One viewer tweeted at the time: “@reallorraine coat to hot for dog in studio.”

Yet Lorraine replied, reassuring the concerned fan that the studios are actually kept cold.

She insisted: “We always keep the studio very very cool and Ruby was fine but thanks so much for your concern.”

Additional viewers butted in and commented that Lorraine would never put a dog in harm’s way.

In fact, one loyal fan argued: “You’re an experienced dog owner who loves Angus & Ruby and would never put them in harms way … ever.”