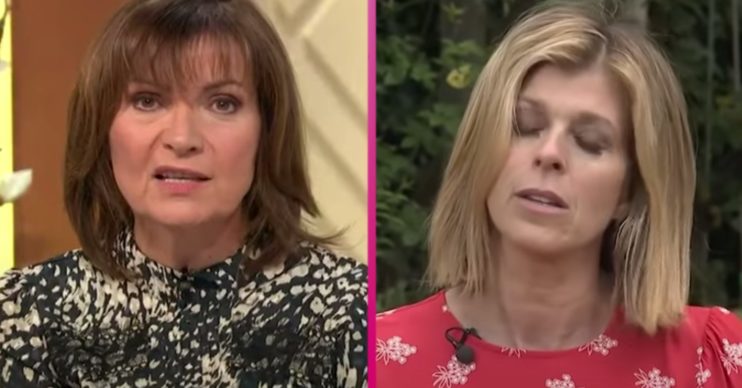 She's furious with those criticising Kate for returning to work

Presenter Lorraine admitted she is furious at those who criticised Kate for returning to work following her husband’s coronavirus ordeal.

Derek Draper was hospitalised with the disease in March and was placed in an induced coma.

Despite battling the illness, he is still recovering and remains ill.

What did Lorraine say about Kate Garraway?

According to Lorraine’s column in The Sun, brave Kate was advised by Derek’s doctors to try and carry on as normal a life as possible.

And that included her being back on screen for GMB.

Nasty, malicious carping from moronic trolls is so upsetting.

But it seems Lorraine has been infuriated by viewers who have made snide remarks about Kate’s decision. The Scottish star fumed such critics should be ‘ashamed’ for making matters difficult for Kate’s entire family.

Read more: Piers Morgan demands Meghan and Harry are stripped of titles after their ‘brazen’ comments

She also insisted they have “absolutely no idea” what Kate and her two children, Darcey and Billy, have suffered during such a worrying time.

Lorraine wrote: “I know coming back to presenting duties on Good Morning Britain wasn’t easy for Kate, and there have been a few wobbles when she has given updates on how Derek is doing, but all of us are so proud of the way she has coped.

“That’s why the nasty, malicious carping from moronic trolls is so upsetting. How dare they have a go at Kate for hosting the show and having the ‘audacity’ to smile and laugh at funny items with her co-hosts.

“It’s sickening, and no matter how much anyone tries to ignore such malevolent cretins, Kate will have been deeply hurt.”

Read more: Joe Swash says Stacey Solomon plays ‘mind games’ with him to get him to clean

Lorraine also noted she was concerned Kate’s return may get an unpleasant reaction. But she also said she was glad most viewers are backing Kate and her family all the way.

She also went on to indicate she and her TV colleagues all have a huge amount of admiration for Kate’s courage and honesty.

And that the star’s determination to remain positive was crucial.

Nonetheless, it was announced yesterday (Friday, August 21) that Kate will be taking another break from work.

She told viewers she intends to spend more time with her family.

Kate said: “I’m actually not here next week. I’m taking a bit of time off, to help [my son] Billy get ready for secondary school, and my other children.