Lord Alan Sugar has hit out at current contestant Lewis Ellis over his chest and arm tattoos on Twitter.

The business mogul, 72, called Lewis' tattoos "horrific" after watching the latest episode of BBC's The Apprentice.

He was left aghast by Lewis' large tatts as the business hopeful stripped down to promote Finnish summer tourism in Wednesday's instalment of the long-running reality show.

"Tell me where I am missing the point. What does he look like @bbcapprentice."

The 29-year-old reality contestant responded by thanking everyone that had 'supported' him after Sugar's initial tweet.

He also defended his choice to have his tattoos on display on the show, and included a picture showing them off in all their glory.

"Thank you everyone that took the time to show some support for my 'horrific' tattoos and pointing out no one has the right to judge you or your body."

Lewis tattoos are horrific .Tell me where I am missing the point. What does he look like @bbcapprentice

The tycoon didn't give in however - and Sugar soon responded to Lewis' defiant tweet.

He replied by saying that Lewis' future children would be "embarrassed" by the tattoos and insinuated that they reflected poorly on his character.

He wrote: "Lewis your tattoos tell your story. What are you a Kindle. You have the right to do what you want to your body. I have the right of an opinion. I say they are horrible.

"When you're 50 on the beach you'll wear a T-shirt. You will be an embarrassment to your kids." 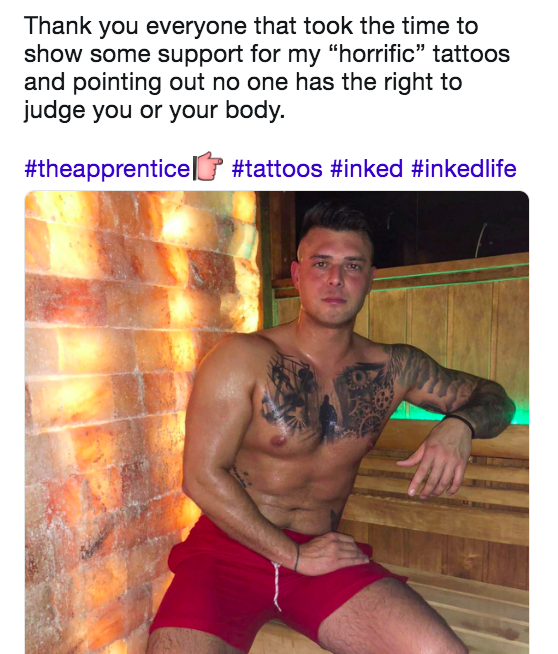 Lewis didn't back down either, and replied:"OK boomer".

The term 'boomer' has become a popular insult aimed at people that were born during the baby boom era and suggests they are out of touch.

Lewis has retweeted many tweets supporting his tattooed appearance - and even joked he couldn't resist responding to Sugar's jibes.

He tweeted: "Trying to compete for Lord Sugar's investment... but I just had to fight him back."

The tweets have ignited thousands of replies, with many coming out in support of Lewis, and ridiculing Sugar for his harsh choice of words.

One fan tweeted at Lewis: "Don’t agree with what he’s [Sugar] said one bit, mental health is such a ‘hot topic’ at the moment and saying you’ll be an embarrassment to your kids is simply horrible...that’s put me right off him."

Another tweeted: "That's an extremely personal comment. It seems you weren't aware of Lewis' tattoos until this task so I cannot see how it is relevant to him as a candidate. Tattoos are often a personal choice and story."

Whose side are you on? Tell us what you think on our Facebook page @EntertainmentDailyUK.