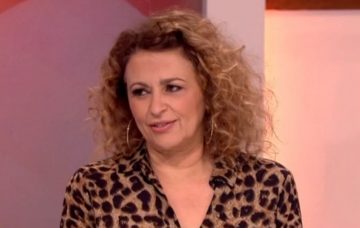 Nadia Sawalha has stunned her fans by announcing she’s “with child!”

Following the arrival of the royal baby, the 53-year-old Loose Women star took to Instagram to tell her 87.6k followers her “incredible news.”

Sharing a video of just her head and shoulders to begin with, she then panned the camera down to her stomach.

But all was not as it seemed, and Nadia, speaking from her holiday apartment, admitted she was just teasing having over-indulged on food and drink during her time in the sun.

She said: “So guys, after the most brilliant holiday here in Spain, I have got some incredible news to share with you. I am with child and we have already given her a name, and her name is Gin and Tonic Rosé Paella, we’re absolutely thrilled. I can already feel her kicking!”

Many of her fans found the post hilarious, saying they almost believed her.

“So funny… I believed you at first,” wrote one.

“I nearly died, thought u were actually pregnant for a moment lol,” said another.

A fourth agreed, telling her: “Omg I believed you! Hahaha. Brill!”

Others said they knew exactly how she felt after eating too much.

“I look like I’m having a bread baby every night. I’m so glad you get the bloat too this is hilarious,” said a second.

However, others didn’t get the joke or perhaps didn’t listen to the video so were confused.

“You’re pregnant?” asked one. “Is it real?” said another.

“Is she really pregnant?” asked a third.

A fourth wanted full clarification on Nadia’s video, writing, “are you really expecting or is the name you’re giving the bump what’s causing the bump.”

Nadia is a mum to daughters Maddie, 15, and Kiki-Bee, ten, with husband, Mark Adderley. She’s also a stepmum to his older daughters Izzy, 23, and Fleur, 18.

For the last couple of years, she’s spoken openly about going through the menopause, discussing her symptoms on Loose Women and via vlogs on her YouTube channel.

Her “baby news” comes after the Duke and Duchess of Cambridge welcomed their third child on Monday, a son who is fifth in line to the throne.

Did Nadia’s video fool you? Leave us a comment on our Facebook page @EntertainmentDailyFix and let us know what you think!