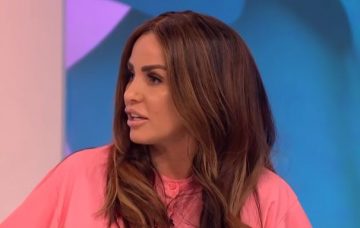 Loose Women’s Kaye Adams has admitted Katie Price is the panellist she has the least in common with.

However, she insisted that doesn’t mean she doesn’t like Katie and, actually, she’s very fond of the former glamour model.

When asked by The Sun which Loose Women star she has least in common with, Kaye said: “It would probably be Katie Price.

“But that’s not in any way to suggest I don’t like her, because actually I’m very fond of Katie and she’s been a lovely revelation to me, but we have very different lives.”

To be fair, Katie does have a pretty unique life.

Not many of us shot to fame as a teenage model, live in the constant glare of the spotlight, open our lives to the reality TV cameras and launched a singing career.

Oh, and most of us don’t also have a string of best-selling books, a fashion line, our own perfume, the ability to compete in equestrian events or a stage tour.

Her fellow Loose Women panellist Nadia Sawalha added: “I haven’t either! She sang in Celebrity Big Brother when I was in there and it was phenomenal. She had an operatic voice, I couldn’t believe it.

“I thought it was a con by Big Brother.”

Nadia and Kaye previously sang Katie’s praises in an interview with OK!, saying everyone on the show really enjoys working with her.

Nadia, 53, said: “We’re all really fond of Katie Price – she’s never shown one bit of prima donna behaviour and has brought a whole extra audience to us.”

Kaye, 55, added: “Everyone has such a pre-formed perception of who she is and what she stands for, but we see a very different person – a very sweet person.”

Katie, 39, joined the Loose Women panel in 2015, after previous guest spots over the years.

She’s been absent from the ITV programme in recent months while she films the second series of her Quest Red reality show, My Crazy Life, but is due back once those commitments wrap up.

A spokesperson for Loose Women recently told Digital Spy: “Katie is currently hectic on her filming schedule for her reality show.

“She remains a regular face on Loose Women, and when filming wraps, Katie will return to her usual Loose Women slot times.”

A source added to The Mirror: “It’s purely a case of diary clashes.

“It just means there are limited days she could go on, and then on the days Loose Women have a spot for her, she’s got other commitments.”