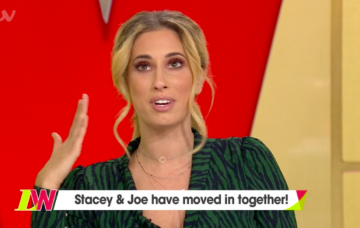 We're betting the actor wasn't too pleased about this...

As the show began, the panel – including Andrea McLean, Nadia Sawalha, Kaye Adams and Stacey Solomon – talked excitably about their Stace moving in with Joe, her boyfriend of two and a half years.

Mum-of-two Stacey said they were already bickering over wardrobe space, as she admitted she’d stuck the former EastEnders’ star with hanging his clothes in a downstairs room.

The panel teased Stacey and then surprised her by ringing Joe, 36, at home, where he was in the middle of painting the walls.

As the call finished, Joe’s number flashed onto the screen.

@loosewomen Are you aware that Joe's mobile number appeared on screen when he disconnected????

Eagle-eyed fans were shocked and amused, writing: “@loosewomen Are you aware that Joe’s mobile number appeared on screen when he disconnected????” while another tweeted: “Give Joe a new mobile number #LooseWomen”.

A fourth asked fellow viewers: “Right, who all phoned Joe Swash at the break after #LooseWomen showed his number on screen?”

Taking to Instagram from inside the new family setup, she wrote, “HOME SWEET HOME. Finally all in and ready to start a fresh together.”

Referring to their dinner, she added: “If you’re wondering what’s going on here… we are eating a Chinese out of random Christmas dishes, using our hands, whilst sat on washing baskets and cardboard boxes eating off of a cat basket. Nothing to see here…”

Joe, who is due to fly out to Australia to film I’m a Celebrity… Get Me Out of Here! spin off, Extra Camp any day now, is seen leaning against a wall, while Stacey and her two sons Zachary, ten, and Leighton, six, sit on the assortment of makeshift chairs.

Joe also shared the picture on his own Instagram account, adding “It was moving day for us! We are now in our home.”

These two are so adorable. Let’s hope Stacey didn’t get in trouble when she got home for that phone blunder – congrats you guys!

What would you say to Joe on the phone? Leave us a comment on our Facebook page @EntertainmentDailyFix and let us know what you think.