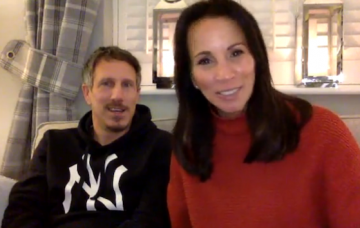 They went live on Facebook to discuss their unusual health approach

TV presenter Andrea McLean has revealed she and her husband are undergoing a ‘gut cleanse’ in an attempt to treat her food intolerances.

The 49-year-old has spoken previously about her lactose allergy – but it seems she has been increasingly suffering with reactions to other foods, too.

Having been ill despite taking precautions with their food to ensure they’re cooking with fresh ingredients without even a hint of lactose, the Loose Women host turned to a nutritionist after initially believing some of her symptoms may be due to the menopause.

And it seems a fungal infection may be the cause of Andrea’s latest medical issues – with suggestions she may have had “a worm” inside her, too.

Speaking alongside hubby Nick Feeney during a Facebook Live broadcast for This Girl Is On Fire, Andrea explained to fans why both of them had decided to give their stomachs a “rest”.

Explaining she has been burdened with severe bloating, the telly favourite described the agony of how the mystery intolerance affected her day-to-day.

“I was reacting badly to anything I was eating, energy levels were really low. Every day was like wading through treacle,” said Andrea.

She also detailed how tests – following a consolation with nutrition and lifestyle author Hannah Richard – flagged up she was actually enduring a fungal infection called microsporidium.

Admitting her body was “totally out of balance” and “everything was wrong”, Andrea went on to reveal Nick was also on board with the procedure to demonstrate his support for his stricken wife.

According to Nick – who feels he is already struggling – the cleanse lasts around two months and is staggered to ensure the first month is much more restrictive than the second.

However, although the cleanse prohibits carbs such as bread, pasta and potatoes, the couple were keen to point out they were not focusing on dropping pounds.

Andrea told those watching: “It is not a faddy diet thing. It is to do with things that harbour mould and sugar.

“It is nothing to do with what you look like on the outside.”