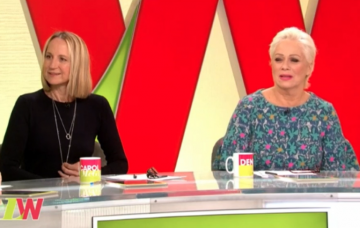 A blast from the past!

Carol McGiffin and Denise Welch have reunited on Loose Women for the first time in five years.

The presenters both returned to the daytime show separately earlier this year, however, on Monday they finally sat alongside each other on the panel.

It wasn’t long before the pair began reminiscing about the past and revealed they’ve “always stayed in touch” since leaving the show.

Denise immediately pointed out that she and Carol had unintentionally swapped seats, as she usually sat on Carol’s right side.

She said: “I used to be there didn’t I?” to which Carol replied: “That was my chair,” as she pointed at Denise’s chair.

“But I just do as I’m told,” Carol laughed. “I just get told to sit here. But it does feel a bit weird you sitting there.”

Denise added: “Sometimes it feels like a million years [ago since we were on the show] because we’re in a different studio.”

She quipped: “But in other ways it feels like it was yesterday like when we were arguing in the meeting this morning.”

The pair discussed how they’ve both changed since leaving the show, with Carol saying: “Nothing else has changed. We’ve both got the same sort of hair. We’ve still got our own teeth.”

Denise then pointed out that Carol used to be against having any kind of cosmetic procedure done to her face, however, recently underwent a facelift.

Denise, who has previously had Botox, said: “Carol used to literally go, ‘I can’t believe it, all those needles, you’re going to look like a lion if you have anymore done’ and now it’s all nip and tuck. Mind you, it looks fantastic,” referring to the results of Carol’s surgery.

Denise then said she’s changed her mind on drinking and “flashing”, saying: “I don’t drink anymore. I have given up my compulsive flashing disorder. I used to think it hilariously funny.

“I used to flash to everybody and Carol used to say, ‘If you’re going to flash your bra, at least buy better underwear, you’ve got the worst underwear of anyone in the world.'”

Viewers loved having Carol and Denise back on the show together and took to Twitter to share their thoughts.

@loosewomen love seeing Carol and Denise back together again, brings back memories of how funny loose women used to be

However, some viewers weren’t keen on the pair’s reunion.

Welcome folks! To the Denise and Carol Show! #loosewomen

What did you think of Carol and Denise’s reunion on Loose Women? Leave us a comment on our Facebook page @EntertainmentDailyFix and let us know what you think!