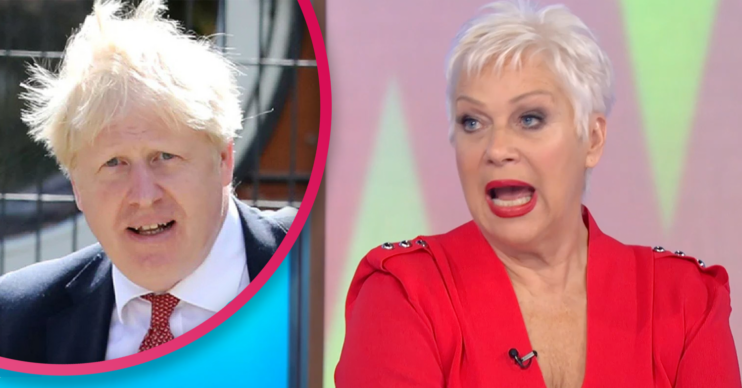 He became a dad for the seventh time this week

Loose Women star Denise Welch has called for Boris Johnson to have a “vasectomy”.

The Prime Minister became a father for the second time with wife Carrie yesterday (December 9) after she gave birth to a little girl.

Boris and Carrie are also parents to son Wilfred, while the PM is thought to have at least five other children from previous relationships.

What did Loose Women star Denise say about the PM’s new baby?

Far from sending her congratulations, Loose Women star Denise had an altogether different message for the PM.

She urged him to get a “vasectomy”.

Read more: Jane McDonald apologises to Denise Welch as she misses her milestone

Denise tweeted: “What about mandatory vasectomy Boris as you are historically so worried about overpopulation. Your dad even wrote a book on it. Overpopulation not vasectomy.”

What about mandatory vasectomy Boris as you are historically so worried about overpopulation. Your dad even wrote a book on it. Overpopulation not vasectomy 🤪👍👍👍🍆🍆🍆

What was she referring to?

The star was referring to comments Boris made way back in 2007.

In a speech, he said: “We seem to have given up on population control.”

Boris added: “The world’s population is now 6.7 billion, roughly double what it was when I was born. If I live to be in my mid-eighties, then it will have trebled in my lifetime.

“The UN last year revised its forecasts upwards, predicting there will be 9.2 billion people by 2050.

“I simply cannot understand why no one discusses this impending calamity, and why no world statesmen have the guts to treat the issue with the seriousness it deserves.”

So how did Denise’s fans react to her tweet?

One pointed out: “Whatever is thought about him over his politics and COVID management, his wife has just given birth to a baby girl following a miscarriage.

“There is a lot he shouldn’t get away with, but this is not kind.”

“What about being nice Denise? You’re always preaching about that,” said another.

A third added: “The word Boris and the aubergine emoji should come with a trigger warning because the image has ruined me and my life.”

“A fair question and good use of the aubergine emoji!” laughed another.

“Yep, dad and son so very worried about overpopulation. They have way above average amount of kids each. Do as I say not as I do springs to mind!!!!” declared another.

What do you think of our story? Head to our Facebook page @EntertainmentDailyFix and join the debate.