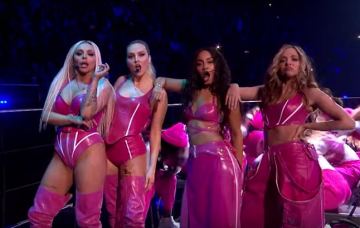 Little Mix slammed for ’embarrassing’ performance at the Brits

Fans thought they were miming

Little Mix were rather harshly critiqued by viewers for their performance at the Brit awards last night.

Perrie Edwards, Leigh-Anne Pinnock, Jesy Nelson and Jade Thirwall were criticised for putting on an ’embarrassing’ show by some.

The girls, who have all proved their impressive vocal talents over the years, were even accused of miming badly!

Clad in matching pink PVC outfits, the girls gave an energetic performance of their number one hit, Woman Like Me.

But it didn’t impress everyone.

One fan wrote: “Can clearly see that Little Mix are miming #BRITs.”

Another added: “Disappointed with the full miming from Little Mix #brits.”

A third added: “I love little mix but it’s obvious they’re miming as they are so bad at it😂 #BRITs.”

Can clearly see that Little Mix are miming #BRITs

Disappointed with the full miming from Little Mix #brits

However, Jesy, 27, Perrie, 25, and Leigh-Anne and Jade, both 26, ignored the hate and thanked their fans for all their support.

They were also on cloud nine, despite the backlash, because they bagged the gong for Best British Video on the night!

The girls posted from the band’s Instagram page: ‪”We don’t know where to start but we just can’t thank you enough. We bang on about how amazing you are but we really do have the best fans in the world!

They added: “So grateful we get to do what we love with each other and celebrate in ways like this!‬”

SHUT UP!! WE JUST WON BEST BRITISH VIDEO @Brits!! You guys are absolutely incredible, this is ALL YOU and we are so unbelievably grateful 😭♥️♥️#BRITs
the girls x

The foursome later said they were still “pinching” themselves after their win.

We had so much fun performing this! Still pinching ourselves! 🌚 Thank you @brits for having us, @MsBanks94 for being a dream and of course to our amazing fans! We love you beyond 💘💘
the girls x https://t.co/eWJs6cwvV5

ED! has contacted a representative for Little Mix for comment.