Little Mix have reignited their feud with Piers Morgan after using footage of the presenter on their world tour.

The X Factor band were performing in Madrid yesterday when the controversial presenter's face flashed on up the screen.

The pair went to war last year after they posed naked to promote single Strip, and footage shows Piers demanding the band apologise.

Fabulous! No surprise that @LittleMix are using me to make their tour a success. Thanks Ladies.

Do you think about us? #LM5Thetour

Just before breaking into their song Wasabi, the footage flashed up and Piers says: "Little Mix I think you need to make a public apology. If you've got the balls, come on this programme and say it to my face."

The girls then opened their song Wasabi with the line: "Come and say it to my face."

After catching wind of the clip, Piers tweeted: "Fabulous! No surprise that @LittleMix are using me to make their tour a success. Thanks Ladies."

He later threatened to "invoice" them for using the Good Morning Britain footage.

"They've literally made me centre stage at their concerts... without my permission, incidentally, so they'll be getting a large invoice," he wrote.

Last year, Piers slammed the girls for posing naked in the promotional material for their single. 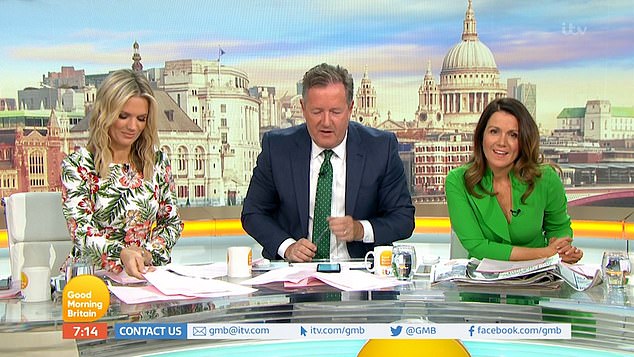 "Their stripping off to sell albums. Let's just call it what it is. It's not about feminist empowerment, it's about 'Let's all get naked, everyone will run the pictures, we'll sell more records'. That's it. The rest of it is baloney."

Piers went on: "They don't have any flaws, they've all been airbrushed, they look perfect. There are no flaws."

Jesy Nelson was later asked about Piers comments on Radio 1, to which she replied: "... He's a silly [expletive]."

As she apologised, Jesy's bandmate Leigh-Anne Pinnock clarified: "The word she was looking for was idiot."

It was Jesy's comment that prompted Piers to demand an apology from the group.

The dad-of-four ranted: "Oh Jesy you let yourself down, love, because when you're doing a campaign against doing rude words, it's probably better not to use rude words on the radio about me."

He added: "I apologise to anyone who is offended by the language Little Mix used about me.

"Little Mix, I think you need to make a public apology during your campaign to root out bad language from public discourse - to me! Grimmy apologised to me on their behalf. I didn't hear Jesy apologise.

"So Jesy, if you're watching, as part of your campaign, perhaps you could apologise for calling me a [bleep]."

After a debate with his co-star Susanna Reid about his tantrum, Piers added to the camera: "If you've got the balls, come on this programme and say it to my face."

Are you Team Piers or Team Little Mix? Leave us a comment on our Facebook page @EntertainmentDailyFix and let us know what you think.