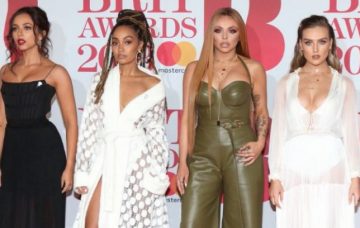 Was it a Little Fix?

Little Mix fans have voiced their disappointment after the band failed to win British Artist Video of the Year at the BRITs 2018.

In fact – after posting screengrabs from the BRITs website suggesting the band were in the lead just as voting closed – many are calling the award show ‘fixed’.

According to fans, the group were in the lead for the Video of the Year prize on the BRIT’s website right up until voting closed.

Those voting could also have their choice counted by mentioning their artist in a hashtag, and Little Mix had been trending worldwide.

Confused fans flooded Twitter after former One Direction singer Harry Styles was then announced as the winner.

Posting screen grabs of the voting page, one wrote: “This is clearly a fix, Little Mix should have won that.”

Another added: “That just proves that the Brits is fixed, because Little Mix has been in the lead tonight and all of those weeks and somehow they didn’t win wtf it doesn’t make any sense.”

A third tweeted: “That was such a fix it even shows @LittleMix was at the top the whole time and was trending all night!!!”

Even a Little Mix mum got involved. Debbie Pinnock, Leigh-Anne’s mum sent a series of tweets asking for answers.

She wrote: “What the [bleep], sorry but this was a fan’s vote and @LittleMix were ahead @BRITs please explain.

“#BRITAwards2018 no not having this @LittleMix robbed how?? They were leading the vote.

“Mixers let’s not leave this I want the fans votes published and I want to see how Harry won.”

Debbie even tweeted: “#BRITsAreRigged” and retweeted many more fans asking for proof.

The X Factor winners took to Instagram on Thursday to thank their fans for fighting their corner, but did not reference the accusations.

They wrote: “Kisses to all our amazing fans who do nothing but fight for us and show passion and dedication. You’re all my winners, I love you <3 #LittleMixFamily.”

Little Mix have gained a huge following since forming in 2011. They’ve had four UK number one singles and bagged the record for the highest first week UK album sales for a girl band since the Spice Girls.

However, some people have pointed out it would make no sense for the vote to be ‘fixed’ so Harry won, given he wasn’t at the ceremony to collect the award anyway.

Harry also broke his Twitter silence during the show to urge fans to vote for him, posting the simple message: “#BRITVOTEHARRYSTYLES.”

The tweet was retweeted more than 80,000 times and had more than 150,000 likes, suggesting a huge amount of activity pushing him towards a win in the last minutes.

Read more: Cheryl hits back as her BRITs appearance with Liam is branded a publicity stunt

Earlier in the night, poor Jesy was roundly mocked by host, Jack Whitehall.

During the show at London’s O2 Arena, comedian Jack sat down with the singer – and her bandmates – to ask if their fans had been voting for them to win an award.

And he managed to slip in a cheeky reference to the now-infamous video of Jesy trying to do a Jamaican accent.

He said: “This is all going to kick off, I can feel it… Last month you hit three billion views onYouTube – and only two billion of those are people watching you try to do a Jamaican accent, Jesy…”

Jack, 29, continued quickly: “Are your fans going to be voting for you like crazy tonight?”

Choosing to ignore the dig, Jesy replied: “Well I hope so, they’re the most dedicated fans, so loyal, so yeah.”

The 2014 video of Jesy has been widely mocked, and quickly became an internet meme. It shows her playing an accent game where she tries to do a Jamaican accent and instead makes a weird face and a bizarre noise.

She later confirmed it bothered her that everyone kept bringing it up, telling the Huff Post: “Oh my god, the most [annoying]! So much. It isn’t my Jamaican accent, it’s annoying.”

Why do you think Little Mix didn’t win? Leave us a comment on our Facebook page @EntertainmentDailyFix and let us know what you think!